COSTA MESA, Calif. — As a teenager in Brooklyn, Fred Eversley filled a pie pan with Jell-O and spun it on a turntable in his father’s basement laboratory. It was one of his many early science experiments, inspired by an article in Popular Mechanics about Isaac Newton’s contributions to modern physics involving a bucket of water and a rope.

Eversley’s motion produced a concave parabolic hollow in the quivering Jell-O that turned out to be his first artwork, though he didn’t know it at the time. He pursued engineering first, becoming an artist in 1967 — and he has essentially applied the technique of centripetal force in endless variations for more than five decades in his sculpture practice. He casts liquid plastics tinted with pigments in molds and gives them a good spin on modified turntables, producing parabolic forms that he hand-polishes to a lustrous sheen.

These seductive fish-eye lenses, varying in translucency and up to eight feet wide, are central to the story of the Light and Space movement in Los Angeles in the 1960s and ’70s, of which Eversley was an unheralded pioneer, working alongside artists like James Turrell, Robert Irwin and Larry Bell, all of whom explored perceptual phenomena.

Ever since, Eversley has been drawing viewers into mesmerizing optical and acoustic experiences, coloring and reframing the world through and around his lenses. “The parabola is the perfect concentrator of all energy to a single focal point,” said Eversley, now 81, who remembers being the only African American in the school of engineering at Carnegie Mellon. “I’m all about universality. I don’t like art that you have to know art history to appreciate.” 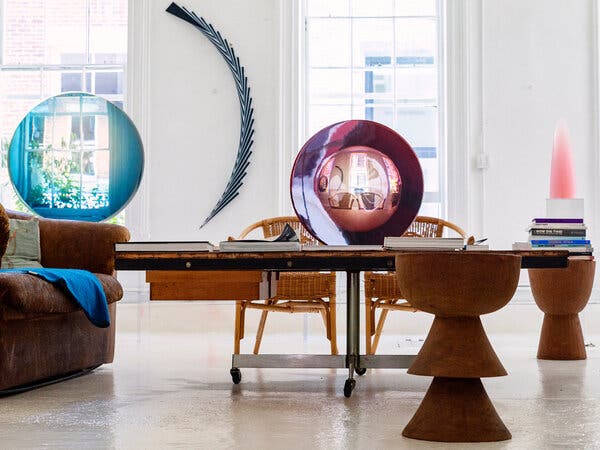 Various works by Eversley in the living room of his apartment. His parabolic lenses are positioned to capture and bend the light and views.Credit…Elliott Jerome Brown Jr. for The New York Times

“Untitled,” a sculpture from 1976, is cast polyester resin and was acquired by the Orange County Museum of Art in the late ’70s. it will anchor an upcoming survey of the artist’s work in the museum’s new building.Credit…Fred Eversley; Photo by Ofstudio
“Untitled (plano concave cylindrical lens),” a new seven-foot-tall tapered cathedral form in polyurethane resin, is a centerpiece of Eversley’s show at the Orange County Museum of Art.Credit…Fred Eversley; Photo by Timothy Schenck

Now the artist has come full circle. “Fred Eversley: Reflecting Back (the World)” is one of several inaugural shows opening Oct. 8 at the Orange County Museum of Art, on the campus of the Segerstrom Center for the Arts in Costa Mesa. The museum’s dramatic and curvaceous new building, double the size of its former home in Newport Beach, was designed by the Pritzker Prize-winning architect Thom Mayne, of the firm Morphosis, who, like Eversley, has been based in Los Angeles for more than five decades.

The show, which runs through Jan. 2, 2023, pays tribute to Eversley’s long history of inclusion in exhibitions at each of the museum’s three previous locations, most notably his 1977 solo show that was pivotal in introducing his work to collectors in Southern California and included the museum’s acquisition of a 1976 black opaque lens.

The small catalog from that show was one of the few on Eversley that Kim Conaty, now a curator at the Whitney Museum, could find when researching her 2016 exhibition, “Fred Eversley: Black, White, Gray,” shown at Art + Practice in Los Angeles and at the Rose Art Museum in Waltham, Mass.

“It’s interesting to work with an artist who has this incredible history, who’s still extremely active, and you recognize the scholarship is not there,” Conaty said. (Eversley will get his most comprehensive publication and survey to date at the Benton Museum of Art at Pomona College, as part of the Getty Foundation’s grant program Pacific Standard Time 2024.)

Even with inconsistent institutional backing, however, Eversley has always supported himself with his science-based art. “I’ve been lucky to have had really great commissions, without having a famous gallery doing it for me,” he said, noting his 35-foot-tall, diagonally bisected cylinder in polished stainless steel and neon, titled “Parabolic Flight,” installed in 1980 at the Miami International Airport.

Lately, the David Kordansky Gallery has been helping raise Eversley’s profile, with solo shows at its Los Angeles base and recent museum acquisitions by the San Francisco Museum of Modern Art, the Museum of Fine Arts, Houston and the Museum of Contemporary Art Chicago. The artist’s first one-man show in New York since the mid-1970s is planned for the gallery’s Chelsea branch next spring.

Kordansky believes Eversley suffered over the years from the art world’s neglect of Black artists of his generation coupled with the view of the Light and Space movement as a nonserious version of New York’s Minimalism. Early on, “Light and Space was seen as a kind of fad,” Kordansky said. “Historically, when we look back on it, we realize just how visionary it was.”

Conaty called the new Eversley show in Orange County “a great institutional return to an artist from their own backyard,” adding that the museum was early to acquire a number of artists working in Los Angeles in the 1960s and 1970s. (John Baldessari, Chris Burden, Vija Celmins and Charles Ray are among those it supported before other institutions in the area.)

“It’s been a place that’s championed really cutting-edge art from the beginning,” said Heidi Zuckerman, the museum’s chief executive and director, who hopes to create more of a tourist destination and at least double the annual attendance of 60,000 with the move to a more central, accessible location and high-profile architecture. “Being founded by 13 women 60 years ago was pretty visionary,” she said. “They took it upon themselves because they saw a void here in Orange County.”

Eversley initially followed his father into the aerospace industry, moving to Venice Beach after graduating from college in 1963 for a job building acoustic laboratories for NASA. Surrounded by a community of artists, including Turrell, Richard Diebenkorn and Ed Ruscha, Eversley gave technical advice to Larry Bell on the design of his vacuum chambers and to Charles Mattox on his kinetic sculptures.

When a severe car accident in 1967 left Eversley on crutches and disability benefits for a year, he began playing around in Mattox’s studio, using his tools and supplies to cast his first small polyester resin pieces mixed with violet, amber and blue dyes. In 1969, Eversley moved into his good friend John Altoon’s studio after the painter’s premature death, remaining in that space, designed by Frank Gehry, for 50 years.

In 1970, Eversley dropped by the Whitney Museum with a suitcase of his little sculptures to see the curator Marcia Tucker, whom he knew from their teenage years selling guitars together in Greenwich Village. Tucker gave him a one-man show (and went on to found the New Museum). That was followed quickly by solo gallery shows at Phyllis Kind in Chicago, OK Harris in New York and Jack Glenn in Corona del Mar, Calif. Eversley happened into an art career.

One of the last artists to remain in the rapidly gentrifying area of Venice Beach — and at the moment of his apotheosis — Eversley was forced out of his studio in 2019 by a landlord who raised the rent. He and his wife, Maria Larsson, have regrouped in New York, in a five-story loft building on Mercer Street in SoHo that Eversley bought for $350,000 in 1980. His parabolic lenses in glorious hues are positioned to capture and bend the light and views throughout the vast living and working spaces.

Giving a tour of his basement studio, Eversley flipped through a stuffed binder notebook of his “recipes” — handwritten pages logging the precise measurements, temperature, speed and time of every piece he’s made. He still uses a potter’s kick-wheel, given to him by De Wain Valentine when he left Venice, that Eversley modified to spin resin poured into the mold.

“Even though you might use the same three colors in five different pieces, if you change the speed of each one, they lay over each other and make different pieces,” he said. “You try to predict, but in the end you get surprises.”

Then Eversley pulled out the original can of black paint that John McCracken, his next door neighbor in 1972, gave him at the time, pronouncing he was done making black pieces. It formed the basis of Eversley’s first opaque sculpture, a perfect black mirror. He went on to experiment with pearlescent white, then mixed the two to make gray lenses.

For his 1977 museum show in Orange County, Eversley suggested that his series of black, white and gray mirrors alluded to the cosmological phenomena of black holes, white dwarfs and neutron stars. “He was thinking about the idea that the black hole is the most luminous space in the universe,” said Courtenay Finn, the chief curator at the Orange County Museum of Art, who is organizing the new exhibition. “I think it is an equal balance between the science and the spiritual or ethereal.”

She is positioning the artist’s reflective black lens at one end of Mayne’s boomerang-shaped mezzanine gallery, drawing visitors on a perceptual journey through the color spectrum of works across Eversley’s career. The arcing space at the core of the museum is a fitting location for Eversley’s parabolic forms: The gallery has cutout views down to the first-floor exhibitions — “California Biennial 2022,” a revival of a pioneering exhibition begun in 1984 of emerging artists altering the art and craft landscapes of California, and “13 Women,” celebrating the museum’s founders and commitment to female artists.

Zuckerman sees Eversley’s rigor and fidelity to materials now echoed by younger artists in the Biennial, such as Alex Anderson, based in Los Angeles and mining the history of ceramics. “Both artists have a rich dialogue rooted in process, honing a craft that allows them to tell stories that shift our perception of not just the world but ourselves,” she said.

Center stage in Eversley’s exhibition is his new piece in purple-tinted polyurethane resin, rising seven feet in a tapered cathedral shape and parabolic on the upper edge. On a coffee table in his living space on Mercer Street, he pointed to an early prototype.

“I’ve looked at it 85 different ways and it changes each time, the reflections, the refractions,” he said. “I come down here in the middle of the night; it’s different in the morning.”

Always anticipating the next experiment, the artist was “looking forward to seeing it larger than life scale with people walking around. It opens a whole new Pandora’s box of possibilities.”

Eversley seen through the opening of one of his works. “I’m all about universality,” he says. “I don’t like art that you have to know art history to appreciate.”Credit…Elliott Jerome Brown Jr. for The New York Times

DJ Khaled’s Latest All-Star Album, ‘God Did,’ Is His Fourth No. 1 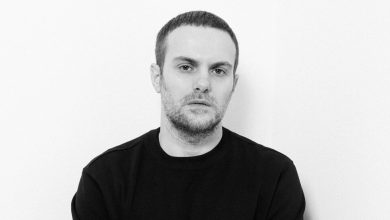 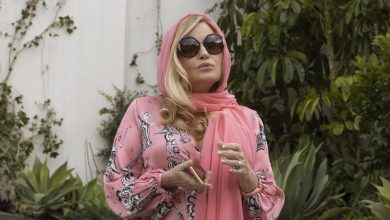 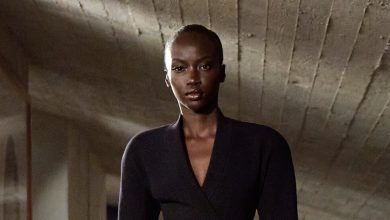 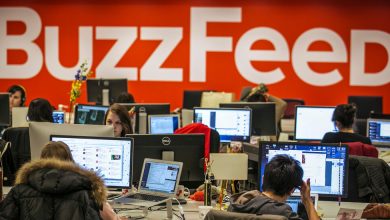