Voting is underway for the 74th Primetime Emmys, and this week we’re talking to several acting nominees. The awards will be presented on Sept. 12 on NBC.

“I’m a little bit of a nerd,” Himesh Patel warned.

That was on a recent Tuesday evening, on a video call from a red-walled room in his London home. Dressed in a black Adidas T-shirt, with a pair of white stripes snaking down each shoulder, he looked less like a nerd than someone ready to take the field.

That is, until he began breaking down strategies for hay and brick trade deals in the board game “Settlers of Catan.”

“You’re all sort of trying to trick each other into trading the wrong thing,” said Patel, 31, in a British accent that would be shocking to anyone who had seen only his performance in the post-apocalyptic HBO Max drama “Station Eleven.” The role earned him his first Emmy nomination, for best lead actor in a limited series. His Chicago accent was flawless.

“I know,” he said. “It sounds lame, but it’s really fun and there’s lots of strategy involved.”

Patel played a different kind of settler on the HBO Max series “Station Eleven,” based on the book by Emily St. John Mandel, which follows the survivors of a devastating pandemic in their efforts to rebuild society — with art and community more than bricks and hay. When Patel’s character, a freelance writer named Jeevan, decides to take in an orphaned young actress, Kirsten (Matilda Lawler), he must also navigate the challenges of becoming a de facto parent.

Like Jeevan, Patel was an understated presence on the show, and his nomination — the show’s sole acting nod among the seven it earned overall, including for writing, direction and score — came as a surprise to many, himself included. (He found out on a train ride to visit his parents in London).

“I like it that way,” said Patel, who, like Jeevan speaks softly and slowly, weighing every word. “I’m not very good at being on the red carpet.”

Patel grew up in Cambridgeshire in eastern England, the child of Indian parents who were both born in Africa. (“I was a child of two worlds,” said Patel, who grew up speaking Gujarati.) He characterized his cultural upbringing as a cross between Bollywood films and fantasy blockbusters like “Star Wars” and “Lord of the Rings.” (If he had not become an actor, he said, he likely would have been a computer modeler.)

After spending his teenage years doing plays with a local youth theater, he got his first big break when he was cast in “EastEnders,” the long-running British soap opera, when he was 16. He dropped out of school, then spent nine years playing the role of Tamwar Masood from 2007 to 2016.

More on the 74th Emmy Awards

The 2022 edition of the Emmys, which celebrate excellence in television, will take place on Sept. 12 at the Microsoft Theater in Los Angeles.

Although “EastEnders” made him a star across the pond, American audiences began to notice him more when he landed the lead role in Danny Boyle’s 2019 musical romantic comedy “Yesterday,” in which he plays a struggling musician who suddenly becomes one of the few people in the world who remember the Beatles. Then he scored a role as the fixer Mahir in “Tenet” (2020), Christopher Nolan’s time-bending spy thriller.

Even more recognize him now because of “Station Eleven” and his most recent film role: Playing the journalist love interest of Kate Dibiasky (Jennifer Lawrence) in Adam McKay’s star-studded 2021 disaster comedy “Don’t Look Up.”

“Station Eleven” episodes did not begin airing until late last year, but Patel began work on the series in 2019, when the cast filmed the last shots of Episode 1, in which Jeevan and Kirsten leave the apartment and walk through the snow toward the lake, in Toronto, standing in for Lake Michigan, in Chicago. Then the pandemic sent them into lockdown. (They passed the time by playing board games over Zoom, with “Settlers of Catan” featuring heavily in the rotation.)

“We didn’t change the story to try to make it feel more relevant,” Patel said. “But you could feel the influence of the pandemic creeping in.” 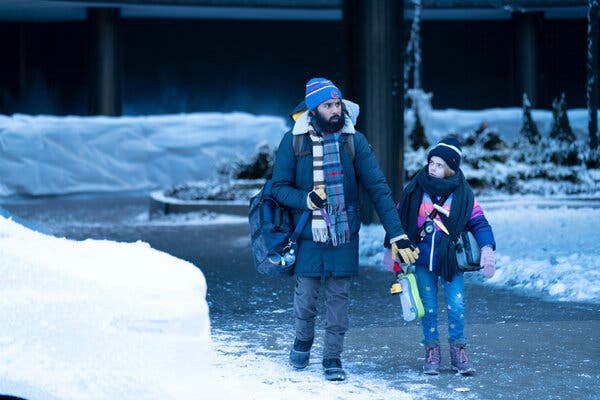 Himesh Patel with Matilda Lawler in a scene from “Station Eleven.” Patel plays a freelance journalist who takes in an orphaned young girl as a pandemic rages.Credit…Parrish Lewis/HBO Max

The show’s creator, Patrick Somerville, based the screen version of Jeevan on the character in Mandel’s novel, though he said he tailored the character to Patel’s acting style.

“He has a stillness about him that was vital to the show actually working,” Somerville said in a video interview from outside the Shedd Aquarium in Chicago, as Lake Michigan waves lapped in the background.

“I’m the loudmouth of the group,” he added. But with Patel, he said, he learned that “one line — or no line — could carry the weight emotionally of a scene.”

One particular scene in Episode 9, which wasn’t in the book, resonated deeply with Patel: A scene in a makeshift birth center, in which Jeevan becomes a birthing partner to a handful of women. The episode was filmed less than three months after Patel had watched his own wife give birth to their daughter.

“I was in the early months of being a father and not knowing the ins and outs of how to do it when we shot that,” he said. “It was so easily accessible because I was going through it.”

Lawler, who plays young Kirsten, said she saw a change in Patel after his daughter was born. “He had more of a fatherly presence” in their relationship, she said. (She had advice for him, too, she said: Learn how to braid hair, stat.)

In a video interview from sleepaway camp in the Pocono Mountains in Pennsylvania, Lawler, who, as in the series, comes across as much older than her 13 years, said the bond between her and Patel was immediate and effortless — a chemistry that was reflected onscreen.

“It’s a strange bond — we just naturally understood each other,” she said.

She offered some other insights on Patel: He’s a great dancer. He’s fantastic at Ping-Pong. He’s “taller than I thought” and “absolutely not intimidating as a person.”

“It’s disarming how inclusive he is,” she said. “He always made everyone feel really comfortable.”

He is also, she confirmed, “kind of nerdy.”

Hiro Murai, who was nominated for two directing Emmys this year — for the pilot of “Station Eleven” and for an episode of “Atlanta” — said he and Patel had a number of conversations about how to balance Jeevan’s emotional intimacy and the comedy, particularly in Jeevan’s relationship with Kirsten.

“There’s something very funny about a guy who’s kind of a stunted adolescent trying to take care of this little girl who’s much older than him in spirit,” he said. “The humanity was the most important part, and the comedy had to come out of the character rather than leaning into situational jokes.”

In the future, Patel, who recently wrapped shooting in Southport, N.C., on “Providence,” an indie murder-mystery comedy in which he stars alongside Lily James and Joseph Gordon-Levitt, would like to do more producing and potentially writing work, he said; one idea is for a series about the lives of the more than one million Indian soldiers who fought for the British Empire during World War I.

“Those were a tumultuous few years in Britain in terms of identity and people understanding their cultural history,” he said, “There are lots of stories to help fill in.

“What excites me,” he added, “is the opportunity to have so many brown actors in front of and behind the camera.”