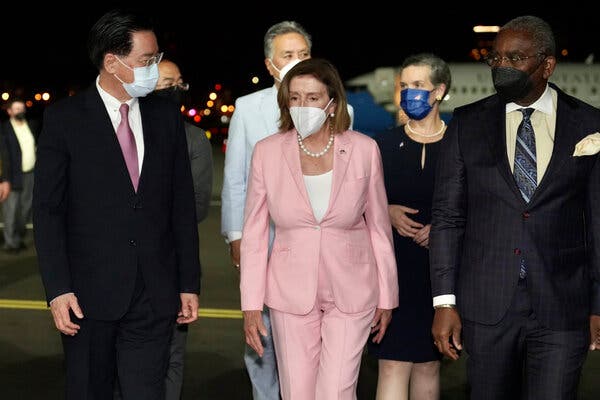 Nancy Pelosi arrived in Taipei, Taiwan, on Tuesday. This photo was released by the Taiwanese government.Credit…Taiwan Ministry of Foreign Affairs

Speaker Nancy Pelosi became the highest-ranking U.S. official to visit the island of Taiwan in 25 years. Her arrival set up a high-stakes standoff between the U.S. and China.

China, which bristles at any perceived challenge to its claims over the island, responded by announcing plans for live-fire military drills in the waters and airspace encircling Taiwan, beginning on Thursday. Chinese officials had repeatedly warned Pelosi not to make the trip.

Soon after arriving Tuesday, Pelosi released a statement saying that the visit was a sign of America’s “unwavering commitment” to supporting Taiwan’s democracy.

But China’s foreign ministry said in a statement that Pelosi’s visit “seriously undermines China’s sovereignty.” The U.S. has expressed concern that China could use the visit to justify military action. Follow our live updates.

In Taiwan: The Taiwanese people have largely welcomed Pelosi’s visit. Their attitude reflects a political reality that has been hardening over the past decade; many of the island’s residents have grown weary of China’s threats and crave the support of the U.S.

Analysis: Pelosi’s trip could take the acrimony between the U.S. and China to new heights, and leave U.S. allies in a difficult position, analysts say.

Russia’s view: The Kremlin described Pelosi’s visit to Taiwan as “provocative,” aligning itself with China’s claims to Taiwan.

Ayman al-Zawahri, right, with Osama bin Laden in 2001, during an interview with a Pakistani journalist.Credit…Ausaf Newspaper for Daily Dawn, via Reuters

An American drone strike killed Ayman al-Zawahri — a key plotter of the Sept. 11, 2001, attacks who took over as the leader of Al Qaeda after Osama bin Laden’s death — at a safe house in Afghanistan.

The strike in downtown Kabul over the weekend capped a 21-year manhunt. After receiving authorization from President Biden a week ago, the C.I.A. fired two Hellfire missiles and killed al-Zawahri on a balcony of the house without killing anyone else, including members of his family or nearby civilians, U.S. officials said.

The strike raised immediate questions about the terrorist leader’s presence in Afghanistan a year after Biden withdrew all U.S. forces, clearing the way for the Taliban to retake control of the country. Al-Zawahri moved back to Afghanistan earlier this year, evidently believing he would be safe there, officials said.

The Taliban condemned the operation, and the revelation that they were sheltering al-Zawahri is likely to harden support for sanctions.

Quotable: “Now justice has been delivered and this terrorist leader is no more,” President Biden said in a televised address on Monday night. “No matter how long it takes, no matter where you hide, if you are a threat to our people, the United States will find you and take you out.”

Legacy: Al-Zawahri, 71, was born in Egypt and trained as a surgeon before becoming a jihadist. He was widely depicted as the organization’s intellectual spine, but his death is likely to have little impact on the group’s day-to-day operations.

Context: The killing speaks volumes about what America accomplished in its 20 years of involvement in Afghanistan. It also says a lot about where it failed.

Donald Trump has hinted that he may run again for U.S. president.Credit…Haiyun Jiang/The New York Times

Trump to face questions about his net worth

Donald Trump will soon face questions under oath about his decades-long pattern of embellishing reports of his wealth.

The former president and his eldest daughter, Ivanka Trump, are set to be questioned this month by the New York State attorney general’s office, which has been conducting an investigation into whether Trump and his company fraudulently inflated the value of his assets. Trump’s son, Donald Trump Jr., was interviewed last week, according to people with knowledge of the matter.

The interviews mark the final stage of a three-year civil inquiry that could lead to legal action against Trump and his company. Trump has derided the inquiry as a politically-motivated witch hunt and denied all wrongdoing. If a lawsuit is filed, and Trump loses at trial, a judge could impose steep financial penalties and restrict Trump’s business operations in New York — all amid a 2024 presidential campaign that he has hinted he will join.

In other U.S. politics news:

A Ukrainian soldier sits in a trench on the front lines near the Ukrainian town of Barvinkove on Monday.Credit…David Guttenfelder for The New York Times

An illegal airstrip in the Brazilian Amazon.Credit…Victor Moriyama for The New York Times

Hundreds of airstrips have been secretly built by the illegal mining industry on protected lands in Brazil, a Times investigation found. More than 1,200 others were located across theBrazilian Amazon — many of them part of criminal networks that are destroying Indigenous lands and threatening their people.

The Dutch vs. the rich

A company building a new yacht for Jeff Bezos, Amazon’s founder, recently asked the government of Rotterdam, Netherlands, to briefly dismantle a portion of a decommissioned bridge, so that the newly constructed ship could sail out to sea. It seemed like a fairly benign request: The operation would have been fast, free and disrupted nothing.

But the Dutch were furious, and they expressed their dismay publicly. Fuming residents became a staple of local TV news and a Facebook group formed to organize an egging of the $500 million boat.

The clash provided an opportunity to see Dutch and American values in a fiery, head-on collision. The more you know about the Netherlands — with its preference for modesty over extravagance, for the community over the individual, for fitting in rather than standing out — the more it seems as though this kerfuffle was scripted by someone whose goal was to drive the Dutch people out of their minds.

“There’s a principle at stake,” said Stefan Lewis, a former City Council member. He framed that principle with questions. “What can you buy if you have unlimited cash? Can you bend every rule? Can you take apart monuments?”

These no-bake peanut butter and chocolate cookies are a cinch to put together.

In Tyrell Johnson’s thriller, “The Lost Kings,” a woman investigates a crime and its aftereffects on her own body and psyche.

That’s it for today’s briefing. See you next time. — Matthew

P.S. Nicholas Kristofis returning to Times Opinion. His column will resume this fall.

The latest episode of “The Daily” is about the killing of Ayman al-Zawahri.

You can reach Matthew and the team at briefing@nytimes.com.

After Pelosi’s arrival, China announced military drills in nearby waters.