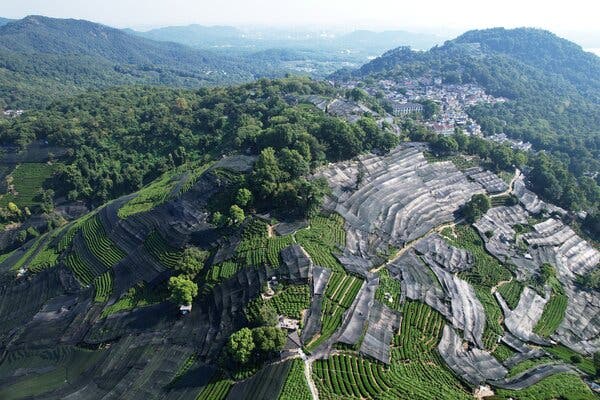 Tea farmers have covered their crops with nets in an effort to shield them from the scorching heat.Credit…CFOTO/Future Publishing via Getty Images

For more than two months, China has faced its most severe heat wave in six decades. The economy is suffering, and the heat wave is forecast to persist for at least another week. The southwest is particularly hard hit.

A drought has shrunk rivers and disrupted the region’s supply of water and hydropower. Factories have been forced to close and the region is suffering from rolling blackouts. In two cities, office buildings were ordered to shut off their air conditioning to spare an overextended electrical grid.

The intense heat is also expected to affect agriculture and significantly reduce the size of China’s rice harvest, because it has caused long periods of drought.

Context: The economy has been headed toward its slowest pace of growth in years, dragged down by the country’s stringent Covid policies. Youth unemployment has reached a record high, while trouble in the real estate sector has set off an unusual surge of public discontentment.

Despite Taiwan’s small size, it is the U.S.’s eighth-largest trading partner.Credit…Lam Yik Fei for The New York Times

The Biden administration will begin formal trade negotiations with Taiwan in the fall, deepening economic and technological ties.

The talks, which were announced in June, will focus on 11 trade areas, U.S. officials said, including agriculture and digital industries. In an apparent nod to China, the governments said they would combat market distortions caused by state-owned enterprises.

China, which claims the self-governed island as its own, responded to the news with displeasure. An official said that Beijing opposed “any form of official exchanges between any country and the Taiwan region of China.”

Background: Relations between Washington and Beijing have deteriorated this summer. After top U.S. lawmakers visited Taiwan this month, China responded by ramping up military drills and firing missiles into the waters around the island. Yesterday, Taiwan held a drill simulating a response to a Chinese missile attack, The Associated Press reported.

Region: The U.S. is conducting a separate trade negotiation with 13 Asian nations to form a pact known as the Indo-Pacific Economic Framework. Taiwan expressed interest in joining those talks, but given its contested status, it has not been invited.

Does the Met have stolen Cambodian artifacts?

The Metropolitan Museum of Art, in New York City, worked hard to build up its South and Southeast Asian collection. But 13 items came from a dealer who was later indicted as an illegal trafficker of Cambodian artifacts.

Cambodian officials now say they believe many of those items were stolen. They also suspect that dozens of other artifacts were looted, and they believe the dealer, Douglas A.J. Latchford, who died in 2020, often sold stolen items to other dealers and donors before they ended up at the museum.

They are now in a standoff with the Met. The Cambodians — who base their claim in part on the account of a reformed looter — have enlisted the U.S. Justice Department.

But the Met has not seen the evidence, including the looter’s accounts, which it says it had “repeatedly requested.” The museum, which said it has a track record of returning looted items, has refused to show Cambodia internal documents that might buttress, or undermine, its title to the objects.

Context: U.S. officials who regard the looter, Toek Tik, as credible have cited his testimony in three cases. Earlier this month, the U.S. attorney’s office for the Southern District of New York announced the return of 30 looted artifacts that had been sold by Latchford.

Mourners carrying the body of a victim of a mosque bombing in Kabul yesterday.Credit…Ebrahim Noroozi/Associated Press

The War in Ukraine

“As long as we have blood in our body we will fight,” a 70-year-old fighter said.

In northern Afghanistan, hundreds of Shiite Muslims joined an uprising led by a former Taliban commander. Times journalists spent time with the rebels.

Lives lived: Hanae Mori, a Japanese couturier, was the first Asian woman to join the ranks of French high fashion. She died at 96.

A feud over the Zulu throne

The Zulus have a new king. But it’s not clear exactly who he is.

South Africa’s largest nation has been gripped by a battle over the royal succession since King Goodwill Zwelithini’s death last year. This Saturday, Misuzulu Sinqobile Zulu is expected to perform a ritual that will be a precursor to his formal coronation. Last weekend, his brother Simakade ka Zwelithini carried out the same ritual.

Misuzulu has already been recognized by the South African government and senior members of the royal family. But his right to the throne is being challenged by Simakade, King Zwelithini’s oldest living son. There has been a scuffle at the royal palace. At least one news outlet ran a poll asking readers to pick a king.

During a televised court hearing that weighed custom and constitutional law, a judge ruled in favor of Misuzulu. But his detractors have refused to accept the decision. There’s more at stake than a royal title. The head of the Zulus will control a $3.9 million annual budget provided by the South African government.

As the traditional leader of 14 million people, the Zulu king also has a politically influential position. — Lynsey Chutel, Briefings writer based in Johannesburg.

Here are some unexpected streaming suggestions.

In “Elizabeth Finch,” a rigorous new novel from Julian Barnes, an adult student nurses an obsession with his teacher.

That’s it for today’s briefing. See you next time. — Amelia

P.S. The Times’s Video team won an Edward R. Murrow Award for its documentary about Jan. 6.

The latest episode of “The Daily” is on documents at Mar-a-Lago.

Lynsey Chutel wrote today’s Arts and Ideas. You can reach Amelia and the team at briefing@nytimes.com.

Daryl McCormack Has More Than Luck on His Side

Social Media Was a C.E.O.’s Bullhorn, and How He Lured Women