Good morning. It’s Tuesday. Scroll down to see why a State Senate candidate who’s 58 is glad he gets along with his mother, who’s 94. But first, a challenge to the city’s plan to make room on Governors Island for a climate change center. 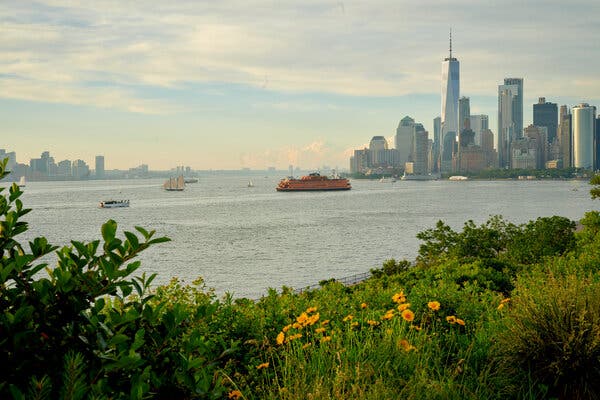 The view from Governors Island.Credit…Gabby Jones for The New York Times

Roger Manning acknowledges the irony of filing a lawsuit challenging an environmental review of an office complex that’s expected to be occupied by a climate change research center.

But the climate center is irrelevant, said Manning, a co-founder of the Metro Area Governors Island Coalition. “The issue was the rezoning. Heights. Densities.”

Now, a hearing on the lawsuit is scheduled for Tuesday in State Supreme Court in Manhattan. The land in question, as the name of Manning’s group suggests, is on Governors Island, across New York Harbor from Lower Manhattan.

Manning and others describe the island as shaped like an ice cream cone, with the climate center planned for the cone part. The ice cream part has buildings that date to 1794. The federal government sold both parts to the city for $1 in 1995.

The opponents’ concerns do not revolve around the importance of the climate change center, but around the buildings it would occupy.

They say the buildings would wreck the island, with towers that Manning said could go as high as 25 stories. That is short compared with the super-talls on Billionaires’ Row in Manhattan, but tall enough, Manning said, to cast shadows on the New York Harbor School, a public high school on the island that trains students for maritime and environmental careers. He also said the buildings would displace three urban farms, including one with a teaching garden that school groups can visit.

The lawsuit also takes issue with the idea of creating parking for 200 vehicles.

The city and the Trust for Governors Island, which oversees the island, say the climate center would create 7,000 jobs. Mayor Eric Adams mentioned the center in his “rebuild, renew, reinvent” blueprint for the city’s economic recovery in March. And in April, the trust announced four finalists in a competition for the climate center — the Massachusetts Institute of Technology, Northeastern University, Stony Brook University and, in a joint application, the City University of New York and the New School. The winner is expected to be announced next year.

Manning’s lawsuit seeks to overturn the 2021 rezoning and save what he called “our country place in the city.” His group, a grass-roots organization formed in 2020, has been joined by more than 20 other plaintiffs, including the South Street Seaport Coalition and Kent Barwick, the president emeritus of the Municipal Art Society.

The trust, too, has high-powered supporters, including Tom Wright, the president and chief executive of the Regional Plan Association. “I think there’s a fundamental disagreement here,” Wright said on Monday, “which is while everybody wants to protect and preserve the unique nature of Governors Island, the question is, is the best way to do that with a partnership” along the lines of the strategy the trust has taken.

Sarah Krautheim, a spokeswoman for the trust, said it was “fully confident that the rezoning was undertaken and approved in accordance with the law.”

Expect a mostly sunny day, with a high around 90 and a chance of showers in the morning and late afternoon. In the evening, expect mostly clear skies, with temps dropping to the mid 70s.

In effect until Aug. 15 (Feast of the Assumption).

Moving in with Mom

You’ve read about the new district maps for the New York State Senate, which prompted some incumbents to run in districts they don’t live in now. That, in turn, has them thinking about new living arrangements.

Take State Senator Joseph Addabbo Jr., a Democrat from Queens. His current district, which stretches from Maspeth to Rockaway Beach, was made more compact. Howard Beach, where he lives, was taken out. To live in the new district, he said he would probably have to move in with his 94-year-old mother.

“Thank God, I was nice to my mom all these years,” said Addabbo, who is 58 and facing a primary challenge for the first time since he was elected in 2008. “I think my old bedroom is still available.”

“I will think about that pain after the 23rd of August,” Rivera said, referring to the date of the primary. “I’m not pleased.”

Redistricting has driven some incumbents to campaign in unfamiliar territory, which explains why State Senator Andrew Gounardes was campaigning in Brooklyn Heights on a recent morning. It’s now part of his district, and far more liberal than the Trump-supporting neighborhoods he represents in Bay Ridge.

But the new territory created an opening for a challenger, David Yassky, a former city councilman from Brooklyn Heights. “I have deeper knowledge of these neighborhoods than anybody else in the race,” said Yassky, adding that he was running to give voice to the district’s concerns about affordability and safety on the subway.

In the Bronx, Rivera’s primary sparked an intraparty clash. To keep from facing against another lawmaker, he decided to run in a district that includes about 50 percent of the heavily Hispanic district he currently represents. But the new district also takes in Riverdale, which is more white and more affluent.

Also in the race is Miguelina Camilo, who had been endorsed by the Bronx Democratic Party before the lines were withdrawn. The party, in a move Rivera called “terribly disappointing,” stood behind her after Rivera switched districts.

“The lines put me in the worst-case scenario,” said Rivera, adding that it wasn’t a secret that he didn’t have a close relationship with the party organization. Camilo, a lawyer who focuses on family law, called the situation “unfortunate,” noting that the endorsement was decided before the courts intervened.

When my wife and I were married, we opted to go to the City Clerk’s office in Lower Manhattan. Only my wife’s brother and sister-in-law accompanied us. Upon arriving, we took a number and sat on a bench to await our turn in one of the small wedding chapels.

As we sat there, we were amazed at the array of outfits worn by the other couples, everything from a man in a tuxedo with a woman in a short gown to a couple who were both wearing T-shirts, shorts and flip-flops.

Numbers were called much as they are at the Department of Motor Vehicles. When we heard ours, we entered the small chapel and met the officiant who would marry us.

“Which service would you prefer?” he asked. “The short version or the long?”

We asked what the difference was.

“About a minute,” he replied.

Is Scott Galloway the Howard Stern of the Business World?

Doing the Math on the Inflation Reduction Act