Good morning. It’s Wednesday. We’ll look at what the Metropolitan Transportation Authority’s looming budget deficit might mean for riders — and drivers. And, with an eye to next week’s primary, we’ll recap a key congressional race in Manhattan. 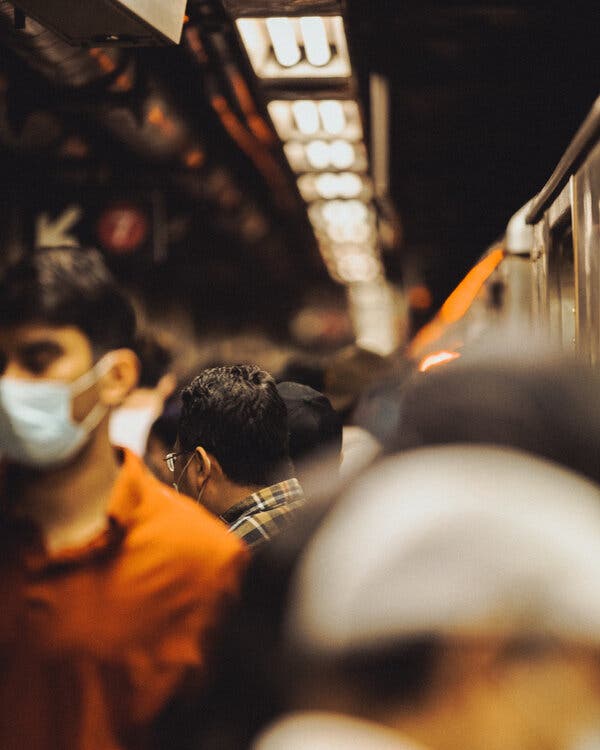 The Metropolitan Transportation Authority is facing a $2.5 billion budget deficit for 2025, 12 percent of its operating budget. That has New Yorkers who remember past financial emergencies worried about service cuts. I asked Ana Ley, a Metro reporter who covers transit in New York, to explain.

Congestion pricing is one way the M.T.A. can generate new sources of revenue, but that money is only supposed to be used for infrastructure upgrades, like building new platform barriers or elevators. The way congestion pricing works right now, it can’t be used for operating expenses, which are the dollars the M.T.A. uses for day-to-day costs to run the subways, buses and trains. A lot is used to pay employees. That’s the type of money it desperately needs right now.

Some lawmakers have urged the M.T.A. to dip into money it has reserved for system improvements to pay for those everyday operating expenses. But government watchdogs warn that it could push the M.T.A.’s huge debt load even higher because the authority relies heavily on bonds for capital improvement projects.

Transit advocates have said the state should move money from the federal government’s $1 trillion infrastructure bill from highway and road upgrades to pay for transit.

And many experts agree that the M.T.A. — which has a reputation for huge overspending and labor redundancies — could address part of its problem by simply being more efficient.

How bad is the M.T.A.’s financial picture?

It has been bad for a long time. The pandemic just made it get a lot worse very quickly.

More troublingly, the M.T.A. relies more on fares than most other transit systems in the nation, and it lost a huge number of riders through the pandemic. The federal government offered a one-time bailout of more than $14 billion to keep it afloat, but that money will run out in two years. That’s why transit leaders are scrambling for a fix.

How far from prepandemic ridership is the M.T.A. right now? What about earlier forecasts that said the M.T.A. by next year would carry 86 percent of the passengers it had before Covid hit?

Ridership has struggled to rebound and hovers at about 60 percent of prepandemic levels. Forecasters predict they will reach only 80 percent of prepandemic levels by 2026, which is way down from earlier expectations of 86 percent by next year. As a result of that drop, the latest projections from the authority’s consultant, McKinsey & Company, estimate that the M.T.A. will bring in $7.9 billion in revenue in 2026, down considerably from a previous estimate of $8.4 billion. Before the pandemic, it had expected to make $9.6 billion that year.

Those early pandemic estimates now seem too rosy because at the time that McKinsey made them, it didn’t expect the coronavirus to evolve so much and stifle the city’s recovery. We also didn’t know remote work would become so popular, or that riders would avoid transit after several high-profile violent incidents amplified the perception that the system has become more dangerous.

Without help from the state, not much that would make riders or transit workers happy.

It could cut service, raise fares or lay off employees. But its potential budget gap is huge, and those things alone would probably not fix it.

Cuts would be especially devastating, because they could plunge the system into a so-called transit death spiral, where reduced service and delayed upgrades make public transit a less convenient option, which would reduce ridership and further shrink revenue until the network collapsed. The M.T.A. got a glimpse of that in 2010, when transit leaders cut their way out of a fiscal crisis triggered by the Great Recession, inconveniencing 15 percent of its transit riders and driving some away altogether.

Today, any new service reductions risk deepening work force inequities that were laid bare by the pandemic. White-collar workers have had the option to stay home, but many lower-wage workers, who tend to be people of color with longer commutes, still need to travel to their jobs.

Expect of chance of showers in the morning. The rest of the day is mostly sunny, with temperatures near 80. At night, temps will drop to around the high 60s.

With the Democratic congressional primary six days away, it’s time for a recap of a key race.

It’s unusual for two incumbents to face off in a primary for the same seat. But that is what is happening in Manhattan, where a redistricting plan joined the East and West Sides above 14th Street in one district for the first time since before World War II.

Representative Jerrold Nadler, from the West Side, and Representative Carolyn Maloney, from the East Side, are the players in this game of congressional musical chairs. The music will stop when the votes are counted next week.

Both have served in Congress since the 1990s. Both have accumulated enough seniority to be committee chairs, he of Judiciary, she of Oversight.Also in the race is Suraj Patel, a 38-year-old lawyer who says it is time for a generational change.

Senator Chuck Schumer, the Senate majority leader, is supporting Nadler. Many politicians and political operatives had expected him to sit out the primary, as nearly every other House Democrat from New York has done. So has Senator Kirsten Gillibrand. As might be expected, there’s some history between all of them: Maloney endorsed Gillibrand’s campaign for president in 2020. The first time Schumer ran for the Senate, in 1998, Nadler endorsed him.

For Maloney and her allies, the race has increasingly focused on women. With the Supreme Court and Republican-led states rolling back reproductive rights, her supporters see this as a moment to rally behind a woman in Congress. Maloney has spent a sizable portion of the $900,000 she has lent the campaign reinforcing the message “you cannot send a man to do a woman’s job.”

My colleague Nicholas Fandos writes that few women have ever had more influence in Washington or used it with such intense focus — pressing for the Equal Rights Amendment, paid family leave, protections against gender-based violence and a national women’s history museum. Maloney has support from the feminist Gloria Steinem, who called her “the most needed, the most trusted and the experienced.”

The primary fight has been increasingly vicious. Nadler has cast himself as the progressive and has highlighted his status as the city’s last Jewish congressman. Maloney told Nicholas Fandos flatly that Nadler did not work as hard as she did, particularly on local issues.

She also said that residents of one of the nation’s wealthiest and most liberal districts needed her, not Nadler or Patel. But Nadler’s team put together a Nadler women’s group led by two former Manhattan borough presidents, Gale Brewer and Ruth Messinger. Senator Elizabeth Warren appears in a Nadler television commercial, and he also has the backing of the actor Cynthia Nixon, who ran for governor of New York four years ago.

I had not breathed
in years

picked
a wind
the strings
of my sinewed
throat

and a melody
moved through
me

‘I’m Done With Him’: A Mother’s Anger Over Rushdie Attack