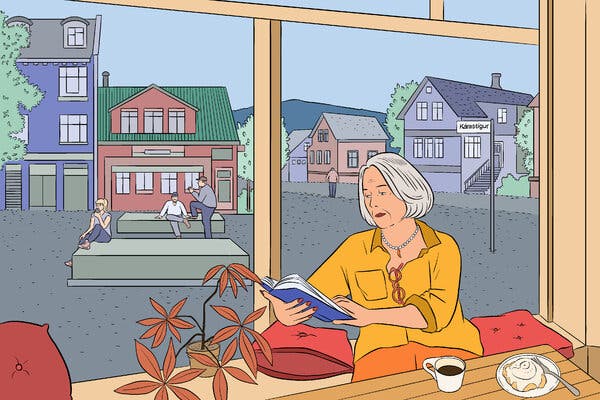 This story is part of a series exploring the world through books. We’ve asked some of our favorite writers to recommend reading that helps you get to know their cities — from Madrid to Mexico City to Istanbul and beyond. Explore the whole series here.

Your friends or family are traveling to Iceland to experience its waterfalls and glaciers, its whales and volcanoes, and its summer nights, which are so bright that they may penetrate your dreams.

You, on the other hand, were intrigued when you heard that there were more published authors in Iceland than in any other country (per capita, of course, which makes everything a little easier for us, with our population of around 350,000), that everyone is a poet and that literature is as important as cod, milk and the weather.

I don’t know if any of that is true. But it could be — and, for our purposes, that is good enough.

What should I read before I pack my bags?

It might not be a bad idea to read some of the Icelandic Sagas before your departure. The Sagas are prose narratives — in many ways not so distant relatives of the modern novel — written mostly in the 13th and 14th centuries, about the goings-on among the settlers of Iceland four centuries prior. As you might imagine, they are rich in struggle and conflict, honor and betrayal, bloodshed and beauty. Medieval and modern at the same time, they are collectively Icelanders’ second Bible.

You can’t help but agree with the novelist Jane Smiley, who called the Sagas “a great world treasure,” or with the poet Seamus Heaney, who said they were “a testimony to the human spirit’s ability not only to endure what fate may send it but to be renewed by the experience.” Or you may be more taken with this review from Katherine Lyle, an Amazon customer: “Highly recommended. I found it relaxing after my divorce. Lots of raids and plundering.”

You may have read somewhere that, to Icelanders, the characters from the Sagas are still very much alive and referred to in daily speech as if they were close relatives. Once in Iceland, you can find out whether that holds true.

Say it’s your first day in Reykjavík. You might be standing by the tallest church in the country, Hallgrímskirkja, after a morning nap, still slightly jet-lagged from the overnight flight, looking to the north at the mountains across the bay and, to the west, down the bustling thoroughfare Skólavörðustígur, having peeked around the statue of Leif Ericson. Keeping in mind your first lesson in Icelandic — that gata, stígur, stræti and vegur are all words for street — you make your way from the church down Frakkastígur, stopping first at Reykjavík Roasters for a cup of coffee and then at a small bakery, Brauð & Co, for a warm cinnamon bun.

Perhaps you will strike up a conversation with the barista and begin to talk to her about Hallgerður, of “Njáls Saga,” who refused to give her husband, Gunnar, a lock of her hair so that he could mend his bowstring while fighting for his life. The barista might stop grinding her beans for a moment and remind you of Hallgerður’s reply: “I recall the slap you once gave me, and I don’t care whether you hold out for a long or a short time.”

Who are the literary icons I might see named on street signs, statues, public monuments?

Energized by caffeine and sugar, you continue down to Laugavegur, where you turn left and walk until you reach house number 32. Embedded in the pavement in front of it is a plaque dedicated to the Nobel laureate Halldór Laxness, who was born there on April 23, 1902. You may have to lower your eyes a bit not to miss it, for it’s an inlaid stone, not one of the shining stars of Hollywood’s Walk of Fame, and almost indistinguishable from the pavement itself. But there it is — in Icelandic, of course.

With the help of the translation app on your phone, you will get a sense of the writer’s wit from the few engraved lines, taken from his memoirs (which are, unfortunately, not available in English as far as I know): “Wise men tell me that I was not born in the wooden house away from the street, where the girl accidentally dropped me from the window, but rather in the stone farm right by the sidewalk where the cat jumped into the baby’s cradle while it slept wanting to attack its face, and was consequently hanged.”

Any bookstores I should visit that have a great English-language section for visitors?

You will perhaps have heard of Laxness’s best known novel, “Independent People,” which was originally published in the early 1930s and became one of the first Icelandic novels to be released in the United States, in 1946. If you continue down Laugavegur and then make your way up to Skólavörðustígur, you will undoubtedly be able to find a copy of “The Book of Sheep,” as we called it when we were young and irreverent, in the Eymundsson bookstore across the street from the old city jail. The store has a good selection of whatever Icelandic literature is available in English, and a cafe to boot. There you can sit and browse, and perhaps even read the first pages about Bjartur’s quest for independence from other men and his daughter’s quest for independence from him. And about his sheep.

Laxness inspired but he also cast a shadow, and if you had been an aspiring writer in Iceland in the ’40s or ’50s, or even the ’60s, you would probably have felt both. Eventually other shadows joined his — including many from abroad — so that, in time, it was as if there were no shadows at all, only inspiration.

At Eymundsson, you may want to pick up “The Good Shepherd,” Gunnar Gunnarsson’s classic novel — the deceptively simple tale of Benedikt, a man looking for sheep in the dead of winter. Gunnarsson wrote mostly in Danish and was translated into Icelandic by Laxness. Later, he translated some of his novels himself, but Laxness turned out to be a better Gunnarsson in Icelandic than Gunnarsson himself.

Moving closer to us in time, I recommend you pick up Einar Már Guðmundsson’s tender story of madness “Angels of the Universe”; Auður Ava Ólafsdóttir’s “The Greenhouse,” subtle and elegant; Sjón’s “The Blue Fox,” a lyrical, fable-like novella; Hallgrímur Helgason’s “The Woman at 1000 Degrees,” which is louder than the previous three novels (as it should be — the protagonist is living in a garage with her laptop and an old hand grenade); or Auður Jónsdóttir’s “Quake,” where memory loss and family secrets are intertwined. Then there is Jón Kalman Stefánsson’s historical novel “The Sorrow of Angels,” which transports you to the West Fjords, and Einar Kárason’s “Storm Birds,” which takes you straight out to sea in treacherous weather.

You will also discover that crime fiction is alive and well in Iceland, ably represented by Yrsa Sigurðardóttir, Arnaldur Indriðason and Ragnar Jónasson.

I wish there were many more Icelandic authors available in English translations: Perhaps by now you’ve been inspired to learn Icelandic to help remedy that.

What’s a good place to curl up with a book on a day off?

You might want to head down to Hljómskálagarðurinn, a park by Tjörnin, the pond in central Reykjavík. There, on a bench next to the statue of Jónas Hallgrímsson, the great 19th century poet, you should open up your “Icelandic Poetry” anthology, with translations by Bernard Scudder. Poems are not easy to translate, but while that certainly applies to Icelandic poetry, this is a good introductory read and would go well with the ducks and the geese nearby.

My father, Ólafur Jóhann Sigurðsson, the first Icelandic writer to be awarded the Nordic Council Literature Prize, took me on a walk around Tjörnin when, at the age of 16, I thought my first book was ready. As we retraced the steps of his protagonist from “Pastor Böðvar’s Letter”— available in English, though out of print — he deftly explained to me that perhaps I should wait a bit.

Remarkably, I listened, and later found the perfect outlet for my manuscript — a seagrass wastebasket, a bit worn, but quite poetic in its own way.

Olaf Olafsson, born in Reykjavík, has published seven novels — including “The Sacrament,” “Restoration” and “The Journey Home” — and a story collection and been recognized with the O. Henry Prize and the Icelandic Literary Prize, among other honors. He is also a former Time Warner executive and is credited as having been in charge of the launch of the Sony PlayStation in the U.S. and Europe.

At Last, Online Travel Planning Is Becoming (a Little) Easier