The president disbanded the Federal Police and created the National Guard to tackle soaring violence, but three years later, criminal cartels have expanded their reach.

By Maria Abi-Habib and Oscar Lopez

CELAYA, Mexico — The butcher had been killed and no one knew why. The execution occurred in broad daylight as he worked in a family-owned restaurant, one of many murders that go unsolved every week in Celaya, among Mexico’s most dangerous cities.

His co-workers and family cried and drank tequila to calm their nerves, while a forensic expert walked among tables still covered with food left behind by customers who had fled during the shooting.

The plight of this city is part of the worsening security situation across the country. Police in places like Celaya say they are outgunned by criminal gangs in a war they are losing, while the federal forces meant to fight these battles often seem to show up after the shooting is over.

Many officials and analysts say that the endless bloodshed — a signal of a government losing control over the country — has been exacerbated by the transformative security strategy put in place by the current president, Andrés Manuel López Obrador, shortly after taking office, which gutted intelligence operations and so far has failed to quell the carnage. 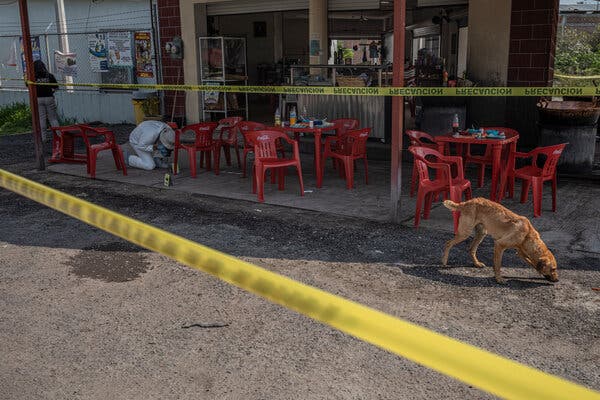 A forensic investigator at a restaurant in Celaya where a man was murdered last week.

The market in Celaya, where vendors say they have complained about constant extortion from local gangs and drug cartels.

The violence has continued unabated throughout Mexico month after month: For a few days in August, drug cartels and gangs went on a rampage across four states, firing on police and troops, burning businesses and vehicles, and shutting down roads and businesses, including in Celaya. Days later, the son of Celaya’s mayor was assassinated outside a pharmacy. More violence this week forced schools and universities to cancel classes in Zacatecas state.

Mr. López Obrador has downplayed the violence under his rule and instead blamed the problem on previous administrations.

“Our adversaries are exaggerating,” the president said in a recent news conference. “It’s like staged, it’s propagandistic. There is no major problem, but they do want to grab that banner of violence.”

Yet in Celaya, the restaurant attack was just a normal Wednesday afternoon. Seemingly everyone in this city of some 500,000 people in central Mexico knows someone killed or missing. Homicides in the city were up 32 percent in the first four months of the year compared to the same period in 2021. Community volunteers meet weekly to search for bodies. The government is rarely able to prevent violence or bring its perpetrators to justice.

Celaya was once a prosperous and peaceful hub in Guanajuato state, with major national highways and railways connecting it to the United States. A vibrant auto industry drew Japanese families to live amid its beautiful colonial architecture, commuting to the factories of Honda and other international companies.

Celaya, a city of 500,000, has seen an massive rise in homicides in recent years.
The once vibrant and peaceful city is now seeing foreigners and wealthy citizens fleeing violence.

But Celaya took a brutal turn about four years ago, as one of Mexico’s most powerful cartels, Jalisco New Generation, battled with a local criminal organization for turf. Now, the local government struggles to assert control over security, and many foreigners and wealthy Mexicans have relocated.

“It is called the cockroach phenomenon, they are crossing the borders from one state to another,” Víctor Alejandro Aguilar Ledesma, the Catholic bishop of Celaya, said of the cartels. He said the violence compelled him to speak out, which the church usually avoids. This summer, the nation was stunned when gunmen executed two priests in northern Mexico after a person they pursued took sanctuary in their church.

The issue, the bishop said, was the government’s lack of an effective plan at a national level, an assessment shared by municipal police officials and the chief of security for Guanajuato state.

Mr. López Obrador famously said that his security strategy would be “hugs, not bullets” — investing in communities to combat the poverty that fuels criminality, and dissolving the Federal Police to build a civilian-led National Guard policing force that would be “incorruptible.”

But under these changes, Mexico lost nearly half of its intelligence capacity to investigate and dismantle the country’s vast criminal networks, feeding the impunity that enables crime.

“What should the government do? Govern. And what should a doctor do? Take care of the sick. A civil engineer? Build roads,” said the bishop.

“It is a phenomenon called the cockroach phenomenon, they are crossing the borders from one state to another,” Victor Alejandro Aguilar Ledesma, the bishop of Celaya, said of the cartels.
Celaya police officers chat after a patrol last week.

The president denies that Mexico has gotten more violent during the first half of his six-year term, which ends in 2024. Homicides fell by nearly 3 percent from 2018, the year he took office, to the end of 2021, but the cartels have broadened their reach. Last year, violence caused “massive displacement” events that drove 44,905 Mexicans to flee their homes — a nearly fivefold increase from the previous year, according to Mexico’s Commission for Defense and Promotion of Human Rights.

As the president prepares to deliver his annual state of the union address, the situation has increasingly frustrated Mexicans: In a poll released this week by El Universal newspaper, more than half of the respondents said that worsening violence shows the federal government’s security strategy has failed.

When Mr. López Obrador dismantled the Federal Police in 2019 over documented corruption concerns, he created the new National Guard under the civilian-led Ministry of Security and Citizen Protection to address crime and enable the government to pull the military off the streets. Now, he is expected to transfer that force to the defense ministry.

So far, the National Guard has not delivered the security he promised. Many former Federal Police refused to join because of pay cuts. Others who joined soon left because former military officials leading the National Guard did not treat them as equals, according to police officers interviewed.

The dissolution of the Federal Police also meant Mexico’s anti-crime investigative force was nearly halved overnight, according to an American official who spoke anonymously to share sensitive details. The Federal Police had some 10,000 investigators; the National Guard has just a few hundred, the official said.

A National Guardsman directing traffic near a crime scene in Celaya last week.
Inside the Celaya police station, a National Guard officer holds a man detained for fighting on the street.

Alejandro Hope, a Mexico City-based security analyst, analyzed government data and said that although the National Guard is nearly triple the size of its predecessor, it only made about 8,000 arrests last year compared to some 21,700 by the Federal Police in 2018. Only 14 of the National Guard arrests stemmed from intelligence work.

“Without good intelligence and investigative units, you will always be putting out fires and not preventing them from starting,” said Cecilia Farfán Méndez, a Mexico security researcher at the University of California San Diego.

“The intelligence areas that the Federal Police had, they’ve practically disappeared,” said Sophia Huett López, the chief of security for the Guanajuato state government.

“Here, the work of the National Guard is purely patrolling,” she said, adding that what was needed was in-depth investigation to take down the criminal organizations.

In Celaya, as in many of Mexico’s cities and towns, the municipal police force is too small. According to ratios recommended by the United Nations, a city the size of Celaya should have a 2,300-strong police force; instead it has 900.

The secretary of security for Celaya, Jesús Rivera Peralta, said he had tried to root out graft, and recently fired some 200 police officers for corruption and poor performance.

Jesús Rivera Peralta, security secretary for Celaya, with his security detail last week.
In Celaya, as in many of Mexico’s cities and towns, the size of the municipal police force is inadequate, according to police-per-capita ratios recommended by the United Nations.

As in much of Mexico, that corruption is deep-seated. Two Celaya officers who requested anonymity to speak openly complained about finding drugs and backpacks with cartel insignia inside their superiors’ vehicles.

With a steady flow of weapons smuggled from the United States, where gun purchase laws are more lax, the gangs outgun the Celaya police. Over the past few months, grenades have been lobbed at police patrols.

“A scene of absolute warfare,” Edgar García Carrillo, an emergency room doctor at the city’s main hospital, said of one shooting that left eight dead. He estimates that the number of injuries related to violence has tripled in the last four years.

Last week, the bodies of a young woman and man were found in an empty field, the stench of decay wafting toward a nearby neighborhood and military preparatory school. Security forces and residents looked on as a forensics specialist in a white zip-up hooded suit took photos of the decomposed cadavers.

Forensic investigators inspect the scene where the remains of a body was found in a water channel in Celaya last week.
National Guard soldiers leaving the scene where two bodies were found dumped in a field on the outskirts of Celaya.

After the explosion of violence across Mexico in August, officials from one of Celaya’s largest high schools met with Mr. Rivera and his top security officials, begging for more protection from criminals who harass students on the road to school, robbing and selling them drugs.

“Is it possible to set up a surveillance unit nearby?” asked Maura Martínez, a school official. “It’s a dream we have, but how possible is it?”

“The issue is that lately, the security checkpoints have become a slaughterhouse for the officers,” said Edgar Chávez, a police commander, adding that they would do their best to improve security.

Olimpia Montoya’s brother and a friend, an off-duty police officer, set out one day in 2017, and no sign of them has turned up since then. The authorities brushed off the disappearance when her family reported it, claiming, without evidence, that the two men were in a secret relationship and had run off together. It took government forensics experts five years to collect all the DNA they needed from the family to see if it matched any unidentified bodies.

Ms. Montoya no longer believes she will find her brother alive, but hopes to find his body and give him a proper burial that she and her parents can attend.

“They don’t want to leave this world not knowing what happened to their son,” she said.

Olimpia Montoya has been searching for her missing brother for five years, and has lost hope of finding him alive.