WASHINGTON — In 1991, a trio of junior House members on a bipartisan trip to Asia was encouraged by a Chinese dissident they visited in Hong Kong to make a gesture of solidarity with government opponents and victims of the Tiananmen Square massacre when they reached Beijing.

They quickly embraced the daring idea.

“We were all nodding in agreement at the same time,” recalled Ben Jones, then a Democratic congressman from Georgia who made the trip along with John Miller, a Republican from Washington, and Nancy Pelosi, then an up-and-coming Democrat from California.

Sneaking away to the huge square where a rebellion had been brutally put down two years earlier, the three American visitors unfurled a banner provided by the dissidents and smuggled to the mainland by Mr. Jones.

“To those who died for democracy in China,” read a message embroidered in Chinese and English.

The brazen display provoked a quick police response and a diplomatic tiff — though nothing on the scale of the international uproar surrounding Tuesday’s visit to Taiwan by Ms. Pelosi, who is now the speaker of the House.

But the two events are linked by Ms. Pelosi’s longstanding activism regarding China. Her current clash is just the latest in a more than three-decade career of challenging the Chinese government on human rights and other issues. And it was another example of the most powerful woman in Washington not shying away from what she considers a worthy fight.

Her allies said that if someone had leaked the plans of her trip hoping that the angry pushback from the Chinese government or the worries expressed by the Biden White House could dissuade her from going, they were sorely mistaken.

“They picked the wrong person,” said Representative Jim McGovern, Democrat of Massachusetts, who has worked with Ms. Pelosi on human rights issues regarding China and visited there with her in the past. “She is someone who can’t be intimidated. She doesn’t give in to bullies.”

Though her refusal to abandon the trip in the face of Chinese threats and White House fretting struck some as reckless, the visit was in keeping with Ms. Pelosi’s deep-seated position that China must be held to account for its posture toward Tibet and Hong Kong, as well as its treatment of the Uyghurs and the imprisonment of political activists. 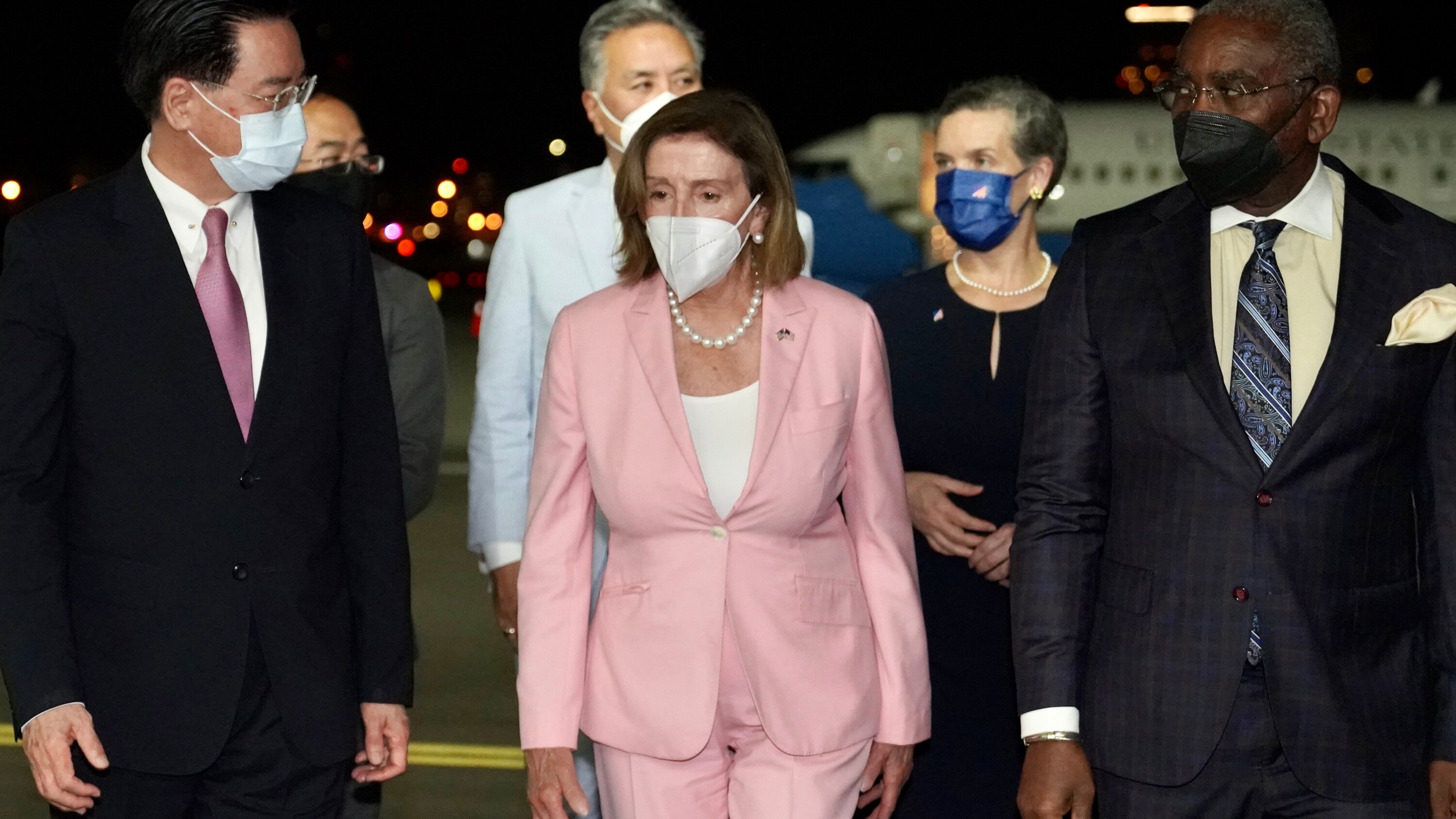 Speaker Nancy Pelosi was the highest-level U.S. official to visit Taiwan in 25 years, raising tensions with China, which bristles at any perceived challenge to its claims on the self-ruled island.CreditCredit…Taiwan Ministry of Foreign Affairs

It was also characteristic of the California Democrat whose job puts her second in line to the presidency. She has rarely shrunk from public threats from her adversaries, and has sometimes gone out of her way to remind them of the stiffness of her spine.

Ms. Pelosi, 82, who has said she will wind down her speakership after this Congress, is also looking toward her legacy, one that includes an unapologetic stance toward China.

Since the administrations of Presidents George H.W. Bush and Bill Clinton, Ms. Pelosi has insisted that the economic benefits of a U.S. relationship with China could not be allowed to overshadow its human rights record or deter strong criticism from national leaders.

“If we do not speak out for human rights in China because of economic concerns, then we lose the moral authority to talk about human rights in any other place in the world,” Ms. Pelosi said last year, marking the 32nd anniversary of the Tiananmen Square massacre.

She has regularly pushed legislation on behalf of Hong Kong and Tibet; hosted the Dalai Lama, the Tibetan spiritual leader, on Capitol Hill; and called for a diplomatic boycott of the Olympics in Beijing. She repeatedly broke with Mr. Clinton on his drive to bestow and sustain favored trade status for China, a policy he said could improve human rights in China through international engagement. Ms. Pelosi vehemently disagreed.

“By following a policy which bolsters the Chinese government, the United States is actually supporting the containment of the Chinese people, their hopes and aspirations,” said Ms. Pelosi in 1997 as she took the Clinton White House to task.

China has taken note of her frequent criticism. Following her call last year for an Olympic boycott, a foreign ministry official accused her of spreading “lies and disinformation” and playing “despicable political games” by using human rights as a pretext to “smear and slander China.”

In an opinion piece published Tuesday in The Washington Post, Ms. Pelosi reminded readers of her trip to Tiananmen Square 30 years ago.

“Since then,” Ms. Pelosi wrote, “Beijing’s abysmal human rights record and disregard for the rule of law continue, as President Xi Jinping tightens his grip on power.”

Allies noted that Ms. Pelosi’s position on China is undergirded not just by the Asian constituency in her San Francisco district but also by her long service on the House Intelligence Committee, including a stint as chairwoman.

“This is a continuation of work and leadership that she has been doing for 33 years,” said Carolyn Bartholomew, a former chief of staff to Ms. Pelosi who is now a member of the U.S.-China Economic and Security Review Commission.

Given her history with China, her decision to follow through on her trip despite warnings from both Chinese and American officials was no surprise to her fellow lawmakers.

“This isn’t something that came out of the blue,” said Mr. McGovern. “This has been an issue for her every day she has been in the United States Congress. She is an extraordinary human rights champion.”

She also drew strong support from Republicans — normally her harshest critics — who lauded her decision to carry out her plan to visit Taiwan and said she had no choice after the Chinese government threatened retaliation should she arrive in Taipei.

Privately, some Democrats complained about the timing of the visit, which had been postponed from April after the speaker tested positive for the coronavirus. They said the furor was drawing attention away from some Democratic successes in Congress and seemed to reflect a desire to command the world stage with her time as speaker running out.

But most familiar with Ms. Pelosi’s views on China said they had little to do with the politics of the moment.

“She was very strong on human rights,” said Mr. Jones, a former television actor who served two terms in the House and still has the protest banner he and Ms. Pelosi unfurled in Tiananmen Square 30 years ago in his home in Virginia. “I totally respect her for that, because it does take courage.”

Eli N. Evans, Who Wrote About Jews in the American South, Dies at 85

There’s a Ring Around This Dwarf Planet. It Shouldn’t Be There.