Good morning. It’s Wednesday. We’ll take a quick look at limits — speed limits and time limits — prompted by the expanded operation of speed cameras in the city. We’ll also look at a book that’s finally permitted to be read in the place it’s about, except for two pages. 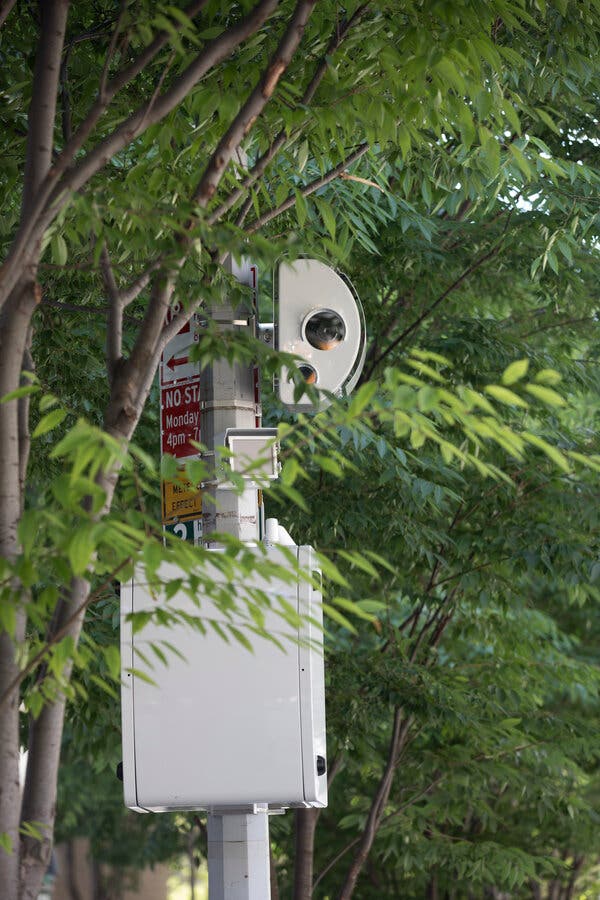 There’s an intriguing fact behind the city’s 2,000 or so speed cameras, which began operating around the clock on Monday: to be ticketed, a car must be seen going at least 11 miles per hour above the speed limit.

On most streets in New York City, the speed limit is 25 m.p.h., so there is leeway between 25 m.p.h. and 36 m.p.h. You could zip along at 30 m.p.h. or 35 m.p.h. without worrying that a Department of Transportation employee scanning images from a camera would send you a $50 ticket.

That made us wonder: In a time-oriented city like New York, what else is like that? How elastic are limits, anyway — or how absolute? What can you get away with?

This quickly became a short history of short amounts of time.

“We see time differently,” said Peg Breen, the president of the New York Landmarks Conservancy. “I’m not sure why, half the time, but we’re in a hurry. When you cross the street and it counts down and it gets to zero, you know you’ve got a couple of seconds before the light really turns green.” She said she races across because “you’ve got at least two seconds to spare.”

What counts as late?

Commuter railroads like the Long Island Rail Road and Metro-North have five minutes, 59 seconds of leeway. A train is not considered late unless it arrives at least six minutes past its scheduled time, said a spokeswoman for the Metropolitan Transportation Authority, which operates both lines.

Amtrak has more leeway, subways less. Intercity passenger trains are not considered late unless they arrive 15 minutes after the scheduled arrival time, according to the Federal Railroad Administration. But a subway train is considered late if it does not reach the end of the line within 5 minutes of its scheduled time.

New York City has had a five-minute grace period on parking since 2010. That gave drivers five extra minutes to move their cars after alternate-side regulations take effect (9:05 a.m. when the times listed on the no-parking sign begin at 9 a.m., for example.).

In zones where drivers have to get a parking receipt from an on-the-street dispenser and put it on the dashboard, the city gives them five extra minutes to find the dispenser and bring back the receipt. The City Council approved the grace period after there were complaints about traffic agents who paid too much attention to the clock and drivers who did not pay enough.

How late can a student be without being marked late? Policies on lateness are set by each school: The city’s Department of Education does not have a systemwide approach.

Some private schools, like SAR High School in the Riverdale section of the Bronx, have experimented. SAR used to give students five minutes of leeway at the beginning of the school day.

“What happened with that was students in their heads interpreted it as the school day begins at 8:05,” said Rivka Press Schwartz, the associate principal. “If they arrived 8:06 and we marked them late, the response was, ‘Are you really going to mark me late? I’m only one minute late.’ We had to remind the students they were six minutes late, not one. So we took the grace period away.”

She said there was a “natural tendency to push things to the limit that you could get away with.”

“What will happen with the speed cameras, I’m sure, is everybody will just define the speed limit as 35, not 25,” she said. “In general, we follow the rules that we are forced to follow. Anyone who’s driving on the highway at what seems to be the posted norm knows that.”

Expect a sunny day, with a high around 90. In the evening, expect mostly clear skies, with temps dropping to the mid 70s.

In effect until Aug. 15 (Feast of the Assumption).

A book ban is lifted, except for 2 pages

There are 10 places where the definitive history of the deadly 1971 Attica prison uprising was long banned — state prisons in New York, including Attica.

Now, in response to a First Amendment lawsuit from the author, the ban has been lifted, except for two pages showing a map of the Attica Correctional Facility. Prison officials are cutting the map out of the Pulitzer Prize-winning book “Blood in the Water” by Heather Ann Thompson, above, a professor at the University of Michigan.

They are also inserting a photocopy of what appeared on the back of one of the two pages — a list of the 43 people who died in the uprising at the maximum-security prison in upstate New York. Among the dead were 10 guards and civilian prison workers who had been held hostage by prisoners for four days.

The state attorney general’s office wrote to Judge Edgardo Ramos of Federal District Court in Manhattan last week, saying the lawsuit should be dismissed. The letter said corrections officials had concluded that New York’s “incarcerated population” could see the paperback edition of “Blood in the Water,” except for the map. The hardcover edition, which has the map on the back cover, is still not allowed, but prison officials will substitute the paperback for anyone who receives a hardcover copy.

My colleague Benjamin Weiser says the dispute arose as book bans have become an issue for libraries and school curriculums around the country. Officials have tried to justify book bans in prisons by saying that some information could be legitimately denied — instructions for building a weapon or planning an escape, for example.

Thompson’s lawyers wrote to Judge Ramos on Monday, arguing that the lawsuit should not be dismissed. Thompson is seeking an order forbidding the Department of Corrections and Community Supervision from blocking distribution of the book.

Thompson, whose lawsuit also seeks a system to notify her if the agency censors copies she sends to prisoners, noted that one of the issues that sparked the uprising at Attica was censorship by corrections officials.

I was expecting a friend to visit me at my fourth-floor Manhattan walk-up last summer. In the time-honored New York City way, when she called to say she had arrived I opened my window and threw a packet with the front-door key inside down to her.

Unfortunately, the packet got caught in the branch of a tree in all its full-leafed glory. My friend, Jocelyn, asked two women who were walking by to help dislodge the packet.

The three of them grabbed the trunk and tried to shake it, but the tree wouldn’t move. One of the women took off one of her new, white sneakers and threw it at the packet several times. On the fourth try, the shoelace stuck on a twig.

The other woman, hoping to knock down the shoe, threw her cane at the tree. Several throws later, the cane became hooked onto a branch. Without a goodbye or a wave, they limped off down Ninth Avenue.

Winter came and all of the leaves fell off the tree. The shoe was still hanging there. The packet and the cane were nowhere to be seen.

Premier League Players Will No Longer Take a Knee Before Games

Why So Many Cars Have Rats in Them Now

There’s a Ring Around This Dwarf Planet. It Shouldn’t Be There.