Scientists have discovered ancient human footprints in Utah, traces, they say, of adults and children who walked barefoot along a shallow riverbed more than 12,000 years ago.

It took “pure chance” to make this discovery at the Utah Test and Training Range, a1 million-acre site where the U.S. Armed Forces test experimental aircraft and other military hardware, said Tommy Urban, a research scientist at Cornell University. Following on Dr. Urban and his colleagues’ recent studies of ancient human and other mammal tracks at White Sands National Park in New Mexico, the Utah tracks extend scientific understanding of ancient North America by revealing not just the existence of a diversity of animals and humans, but also evidence of their behaviors.

Daron Duke, a Nevada-based archaeologist for the Far Western Anthropological Research Group, invited Dr. Urban to assist with a search for ancient campfires at the Utah test range. Dr. Duke and his team published a paper on the contents of one campsite last year.

While driving to a dig site, the two were having an animated conversation about trackways. When Dr. Duke asked what a fossil footprint looked like, Dr. Urban pointed out the window and said, “Well, kind of like THAT!” They stopped the truck, having located the first of what would turn out to be 88 footprints.

“When I spotted them from the moving vehicle, I didn’t know they were human,” Dr. Urban said. “I did know they were footprints, however, because they were in an evenly spaced, alternating sequence — a track pattern.”

The 88 footprints are in several short trackways, some of which indicate that people may have simply been congregating in one area. “It doesn’t look like we just happened to find someone walking from point A to point B,” Dr. Duke said. They believe these footprints are of people who lived nearby. “Maybe collecting things. Maybe just enjoying themselves” in the shallow water, he added.

Dr. Duke said they had also found a type of stone spear tip in a nearby site that might have been used to hunt large animals, but no evidence of the animals yet.

Dr. Urban compared the Utah footprints to the “ghost tracks” in White Sands, a term used for tracks that appear only under certain conditions, then disappear just as quickly. The fossil tracks in New Mexico, as much as 23,000 years old, were uncovered using ground-penetrating radar technology and contained a treasure trove of revelations: tracks of ancient humans and megafauna intersecting and interacting with each other. They showed proof that ancient humans walked in the footprints of enormous proboscideans and vice versa; that one human raced across the mud holding a child, put that child down at one point, picked that child back up and then rushed off to an unknown destination; that at least one giant ground sloth was followed by ancient humans, rose up on its hind legs and twirled as the humans surrounded it; that children played in puddles. 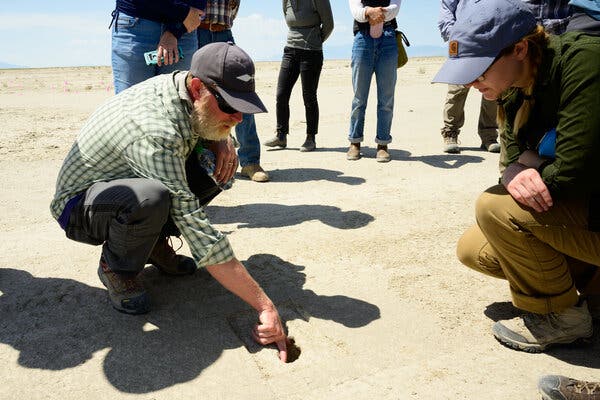 Daron Duke of the Far Western Anthropological Research Group took a group of visitors to the archaeological site at the test and training range.Credit…R. Nial Bradshaw/U.S. Air Force

The discovery of the additional set of tracks in Utah suggests that there are other sites around the United States where more about ancient human behavior waits to be revealed.

“The western U.S. has many similar settings that could have early footprint sites,” Dr. Urban said of the salt flats. He added, “Now we have a second location, there are probably more out there.”

“When we thought through these options, concluding that the most logical explanation is that the footprints were made during the late Pleistocene, then we were excited,” Dr. Urban said.

The Utah footprints are more than what appears on the surface.

“They are subtle, because they are flush with the ground surface and generally covered in a veneer of the same sediment,” Dr. Urban said. “You wouldn’t necessarily notice them if you didn’t already know what to look for.”

When footprints are made, the pressure of the tracks impacts the subsurface, offering information about the weight and size of the people or animals making those tracks, as well as the speed at which they are moving. By studying them with ground-penetrating radar, the team was able to find additional footprints and understand more about the tracks without destroying them.

Dr. Urban and his teammates taught Dr. Duke how to carefully excavate some of the tracks. It was Dr. Duke’s first time working with footprints, and he admitted to feeling trepidation about excavating them. But, he said, “when you see the children’s toes forming in what you’re digging, that’s just amazing.”

The staff at Hill Air Force Base, which administers the range, has worked to include and inform Native American communities about the discovery.

“I’ve now known for about three weeks, and I have to admit, I’m still processing because it is a once-in-a-lifetime find,” said Anya Kitterman, an archaeologist overseeing Dr. Duke and his colleagues’ work on behalf of the Air Force at the test range. “There’s something so personal about the footprints and being able to walk alongside these trackways knowing that someone years ago walked right there.”

Patty Timbimboo-Madsen, a Shoshone tribal member and cultural and natural resource manager for the Northwestern Band of Shoshone, said she couldn’t miss the opportunity to visit the tracks.

“It gives us proof that our people were here,” she said. “And I think our people have always been here.”

Ms. Kitterman says the Air Force is now considering how to manage the discovery site. “We’re still learning this landscape and what these trackways mean,” she said. “How do we preserve them?”

And if the Utah test range site is anything like what was found at White Sands, preserving the site could be worth the trouble, because the researchers think there will be so much more to learn.