The scene was a vibrant pastorale, rendered in thousands of shimmering sequins and beads that filled a nine-foot-wide canvas with a red tasseled border.

In the background were emerald fields, bulbous trees, a blue-and-white streaked sky. Up front were clusters of small figures in conversation on the ground, beside a bull grazing. And anchoring the center of this bustling tapestry were the many manifestations of Kouzen Zaka, the lwa, or Haitian Vodou spirit, of farming — or as an embroidered inscription read at the top of the piece, the “minister of Agriculture.”

There is so much activity in Myrlande Constant’s tapestries that it can feel unfair to ask her to explain each detail. But recently, in New York for the opening of an exhibition of her newest works at Fort Gansevoort gallery in the Meatpacking district, this Haitian artist, who for three decades has led formal, technical and narrative innovation in the tradition of drapo, or Vodou banners, was gamely indulging queries.

“You can see him as a farmer, with his scythe and his satchel,” Constant said, indicating a representation of Kouzen (that’s “cousin” in Krèyol, or Haitian Creole, the nation’s primary spoken language). In one place, he was depicted with a dark complexion, white beard, broad-brimmed hat and a blue, red and white shirt, all made kinetic by cascading sequins and thrown into high relief by her lines of large pearl beads.

Elsewhere Kouzen was displayed young, playing his flute, dancing. He also took the form of Saint Isidore, his Roman Catholic counterpart in Vodou’s syncretic taxonomy. There were iterations as well of Kouzin, his wife and female counterpart. “My dear, let me tell you,” Constant said. “Madame never walks without monsieur.” 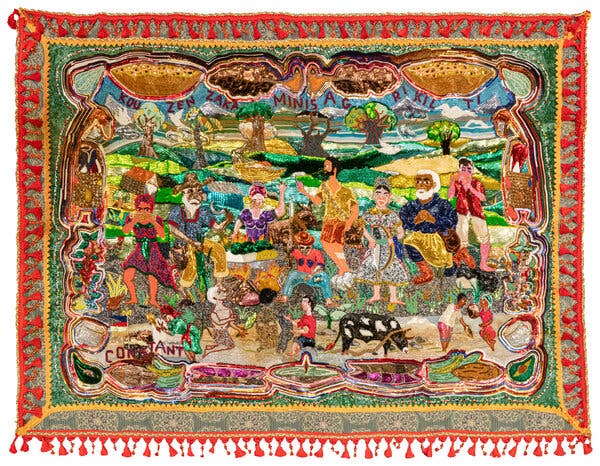 Constant had arrived from Philadelphia, where she was staying with friends, one of whom had taken his taxicab off duty to drive her to New York. She spoke in Krèyol, with the Haitian actor Atibon Nazaire translating.

She wore a red pantsuit and blue top; someone knowledgeable in Vodou might have noted that those were appropriate for that day — a Tuesday — being among the colors of Erzulie, the spirit of love for whom Tuesdays are sacred.

Constant, 54, is a rigorist whose every action accords with Vodou knowledge and cosmology. But she is equally a trailblazer who has taken the drapo tradition — an image of an icon or a symbolic drawing (vèvè) unfurled at the start of ceremonies — and blown it open into a narrative art, at an ever larger scale. Her works have the centrifugal storytelling of, say, a Bruegel painting.

“Erzulie Dantor,” 2022. Blue and red are among the colors of Erzulie, the spirit of love for whom Tuesdays are sacred.Credit…via Myrlande Constant and Fort Gansevoort, New York; Photo by Tony Wang

Long influential locally, she has gradually expanded her international renown from collectors with an interest in Haiti to institutional consecration. Three of her works appeared in the 2022 Venice Biennale. This March a career survey, “Myrlande Constant: The Work of Radiance,” will open at the Fowler Museum in Los Angeles.

The Fowler exhibition’s co-curators, Katherine Smith and Jerry Philogene, emphasized in a joint interview how Constant brought Vodou drapo out of the strictly ritual or ethnographic realm and turned it into a dynamic and sophisticated form of contemporary art, while also affirming women’s work in a typically male field.

“She is the one who introduced historical narrative into the form,” said Smith, a lecturer at the University of California, Los Angeles, and a curatorial associate of Haitian arts at the Fowler, who has known the artist since 1999. “She changed the gender dynamic of the art form. She has transformed the genre into something new.”

Philogene, an associate professor in the American Studies Department at Dickinson College and a scholar of Haitian and Caribbean modern and contemporary art, added about Constant: “She’s concerned with the secular but also the sacred, and unapologetically so; there are reasons for every image in the pieces.”

For Cecilia Alemani, the 2022 Venice Biennale’s curator, Constant’s work perfectly meshed with her exhibition’s focus on the porous relationship between human, natural and mystical realms. “I look at her works, and I see an exuberant and effervescent universe,” Alemani said. “It’s a world that has no boundaries between what’s alive and what’s dead.”

Constant grew up in Léogâne, a town west of Port-au-Prince. Vodou was a presence in the household, informally. Her father was a houngan, or priest, but he left the family early on and founded a temple in a rural area, playing little direct role in her upbringing.

Each piece starts with a line drawing that Constant formulates, during a meditative process, on the back of the cloth fabric.Credit…Gioncarlo Valentine for The New York Times

Rather she came to her art through textile craft — specifically tambour embroidery, in which fabric is stretched taut (like a drum) and worked with a hook, an ornate technique perfected in Lunéville, France, in the 19th century.

In Haiti, a low-wage subcontracting hub for the garment industry, Constant worked with her mother, Jane Constant, in a factory producing elaborately beaded wedding dresses and other items. As a teenager, “growing up in my environment, you have to learn to work,” Constant said. “I learned how to work at my mother’s side.” But she rankled at the low pay and poor conditions, and one day she confronted her employer, who promptly dismissed her.

She began to paint, without much success or satisfaction. But when she tried her hand at drapo, which traditionally involved only sequins, she found that tambour and beadwork opened new possibilities in contour, depth and detail.

Each piece starts with a line drawing that she formulates, during a meditative process, on the back of the cloth fabric, which is then stretched across a frame and worked upside-down‌‌. She reaches underneath the fabric and stitches the sequins and tassels, following the drawing. She can’t see them, she can only feel them, and witnesses the progress of the work only when she turns it over.

Constant compared the application of the tiny sequins and beads to painting with a fine brush. “Everything must be placed very particularly to reflect the vision,” she said.

It is time-consuming work that requires many hands, especially as her tapestries have evolved from small, spare compositions to massive, wall-filling works that can involve 20 people working collaboratively.

Her studio has employed her children, nieces and nephews and many other workers, including artists like Amina Simeon, who, though older than Constant, apprenticed with her before setting up her own studio. Constant’s mother eventually left the factory and joined the studio until her death in 2005.

Constant considers herself at once an artist, a business owner who must provide for her workers and an educator who exactingly transmits her craft to others. “If I see something that doesn’t work, I remove it, but then I have to create something new right there,” she said. “One of the young people might say, ‘Maman, it’s fine here.’ But I’ll say no.” She likened the studio to a pépinière — a plant nursery, where talent can sprout and flourish.

Constant’s art addresses Haiti’s past and present, but her emphasis is rarely on particular events. Her depictions refuse the common reduction of Haiti, in the eyes of foreigners, to a place of permanent distress.

Rather she highlights the spiritual dimension of daily life — as Philogene, the co-curator, writes in an essay for the Fowler exhibition catalog, “the human condition in which the lwa play crucial roles.”

This leaves her scenes open-ended. Thus “Agoueh Thaoyone Négre Tayovi Wanguitor” (1995), dedicated to the lwa of the sea, foregrounds people on a boat, traveling serenely, though we are not told where. To the author Évelyne Trouillot, writing in another essay, this image evokes “boat people” migrants — but seen as hopeful voyagers, not huddled wretches.

Even “Haiti madi 12 janvye 2010,” Constant’s tapestry devoted to the devastating 2010 earthquake, gives as much place to the living as the dead. It depicts people searching, mourning and praying — but also surviving, making life after the disaster. In the center are the Gede, or spirits of the dead, like the top-hatted Bawon Samdi, affirming how mystical forces govern the human condition.

Haiti is currently undergoing anotherphase of deep crisis, marked by the assassination of President Jovenel Moïse in July 2021 and the spread of heavily armed gangs with complex connections to political factions and trafficking that thrive on extortion and kidnapping. They are rampant in much of Port-au-Prince, including Carrefour-Feuilles, the hillside neighborhood where Constant’s atelier is perched high.

She has started a second studio in Léogâne, her hometown, where conditions are less dire. “You feel more at ease, and everyone knows you,” she said. But she maintains the main studio in the capital. When traveling, she connects with her team there — those who can safely make it in — by video.

Constant will absolutely not give up on Haiti. “I have to be home,” she said. “I can’t stay idle.” A few days after the Fort Gansevoort opening, she traveled home.

At the gallery, she had paused before the largest of her new works, titled “Reincarnation des morts,” and reiterated an outlook that transcends political conflicts or social divisions. The work depicted a kind of parade of the Gede — in tuxedos and hats, in more casual outfits, or in the form of skeletons. They were surrounded by coffins, spades, crosses, jugs, candles and other ritually relevant objects.

“You can’t forget that we’re all going there,” Constant said. “Everyone is headed for reincarnation. It’s not happy or angry. It’s a reunion.” We work for the ancestors, she said, and they send us messages. “As much as we think about them, they think about us.”

Tags
Constant She That Who Work

A Short Seller Takes Aim at an Indian Corporate Giant