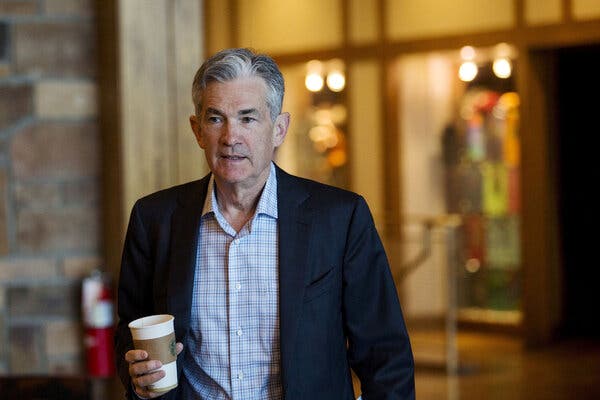 Jay Powell, the Federal Reserve chairman, gets a half-hour slot (10 a.m. Eastern) this morning to deliver his annual address at the Jackson Hole Economic Symposium. On the agenda: an update on the economic outlook, the inflation picture and the path ahead for interest rates.

A recap: When Powell spoke at the most recent rates-setting meeting in July, investors detected a dovish tone, and equities rallied. This morning’s speech will get special scrutiny as investors grasp for any hint at what might come next for the Fed, which has been raising rates rapidly in its campaign to tamp down the fastest rate of inflation in 40 years, writes The Times’s Jeanna Smialek.

After yesterday’s rally, U.S. equities futures are in the red this morning.

Over the years the Jackson Hole conference has been the source of some prescient calls about the economy, but also some pretty big swings and misses. Here’s a selection of the most memorable predictions that have come out of the conference, and how close they came to ringing true.

The prediction: The I.M.F.’s Raghuram Rajan warned of a looming “catastrophic meltdown” in financial markets thanks to “housing prices that are at elevated levels around the globe. While the techniques and instruments to absorb fluctuations have improved, there is uncertainty about how they will perform in a serious downturn.”

What happened: Nailed it. Despite being dismissed at the time (Larry Summers called Rajan’s analysis “misguided”), his projection of a drop in housing prices, and that it would cascade into the markets was on point.

The prediction: The Fed chair, Ben Bernanke, called an end to the recession but warned that job gains would be slow. The words: “Economic activity appears to be leveling out, both in the United States and abroad, and the prospects for a return to growth in the near term appear good.”

What happened: Bernanke was correct on slow job gains, but he was too optimistic about a sustained rebound, which took a few years to develop.

The prediction: The Fed chairman, Janet Yellen, who had incorrectly predicted that interest rates would rise that summer, doubled down on a call for an imminent hike. “I believe the case for an increase in the federal funds rate has strengthened in recent months,” she said.

What happened: Her timing was off. The Fed did raise interest rates, but not until December, which many saw as arriving too late to give Yellen full credit for her forecast.

The prediction: Powell, in a speech that used the word “transitory” five times, said inflation was unlikely to stay much above 2 percent. “Businesses and consumers widely report upward pressure on prices and wages. Inflation at these levels is, of course, a cause for concern. But that concern is tempered by a number of factors that suggest that these elevated readings are likely to prove temporary.”

What happened: Way off. Instead of falling, inflation went on to nearly double to an annual rate of 9 percent in June, from just over 5 percent a year ago. It has since leveled off, but few think inflation will return to 2 percent any time soon.

Regulators accuse Starbucks of discriminating against unionized employees. A regional office of the National Labor Relations Board said that the coffee chain denied such workers wage and benefit increases that were given to nonunion counterparts. Starbucks denied wrongdoing.

A blockbuster deal. In April, Elon Musk made an unsolicited bid worth more than $40 billion for the social network, saying he wanted to make Twitter a private company and allow people to speak more freely on the service.

The response. Twitter’s board countered Mr. Musk’s offer with a defense mechanism known as a “poison pill.” This well-worn corporate tactic makes a company less palatable to a potential acquirer by making it more expensive to buy shares above a certain threshold.

Securing financing. Though his original offer had scant details and was received skeptically by Wall Street, Mr. Musk, the world’s wealthiest man, moved swiftly to secure commitments to finance his bid, putting pressure on Twitter’s board to take his advances seriously.

Striking a deal. With the financing in place, Twitter’s board met with Mr. Musk in April to discuss his offer. The two sides soon reached a deal, with the company agreeing to sell itself for $54.20 a share.

Tensions arise. Not long after Mr. Musk and Twitter reached their agreement, problems began. Mr. Musk  threatened to pull out of the deal if Twitter did not provide more information on how it calculates the number of fake accounts. On June 8, the company announced that it planned to give him access to a large swath of its data.

Musk backs out. In July, Mr. Musk announced that he was terminating the deal, citing the continuing disagreement over the number of spam accounts. Twitter then sued the billionaire to force him to go through with the deal. But Mr. Musk fired back in a legal filing, arguing that the company concealed the true number of fake accounts on its platform, accusing Twitter of fraud.

Citigroup will shut its Russian consumer banking arm. The U.S. firm will close 15 branches and lay off or move 2,300 workers, after struggling to sell the operation. A major factor in the decision was Russia’s invasion of Ukraine and subsequent sanctions on Moscow.

Paul Allen’s art collection could fetch over $1 billion at auction. Christie’s will sell more than 150 works owned by the Microsoft co-founder, who died in 2018, including masterpieces by Renoir and Roy Lichtenstein. The sale would be the largest in auction history, with proceeds going to philanthropy.

Judge Kathaleen McCormick, who is presiding over Twitter’s lawsuit against Elon Musk, yesterday announced a trio of rulings that resoundingly favored Twitter. She twice sided with Twitter in keeping discovery confined to a tighter time window. And she is compelling Musk to provide more detail on the analysis he performed that he says helped justify his decision to walk away from the deal to buy the social network.

Perhaps just as worrisome for Musk was the language and tone in which she delivered the rulings, indicating impatience with his demands. At one point, Judge McCormick refused to order Twitter to make good on Musk’s most expansive data requests “because no one in their right mind has ever tried to undertake such an effort.”

Judge McCormick kept the focus on the period covered in the merger agreement, whichgoes back only to January 2021. She denied two requests from Musk’s team pushing for discovery to go back multiple years. In so doing, the judge rejected as “absurdly broad” their demand that Twitter retrieve from its data logs several years’ worth of evidence to explain how it arrived at the spam-to-active-users ratio the company disclosed in previous filings. Instead, Judge McCormick ordered Twitter to supply a much narrower sample of 9,000 accounts since January 2021.

She also ordered Musk’s data scientists to hand over their work. Before Musk walked away from the Twitter deal, he hired data scientists to analyze Twitter’s “firehose” of data that, he says, resulted in such alarming results that he wanted out. Twitter has asked Musk to turn over that analysis; Musk has declined, arguing that it is privileged. (Experts hired only for trial preparation typically have client-attorney privilege.) But McCormick said the scientists also acted as witnesses, since they were part of a process that would lead to Musk abandoning the deal. And given the importance of their role — and Twitter’s inability to get their analysis elsewhere — they should provide their work, she argues.

What about Mudge? Musk’s side dropped another filing yesterday bringing Judge McCormick’s attention to the recent whistle-blower claims from Twitter’s former security chief, Peiter Zatko — who goes by the nickname Mudge — alleging that the company misled the public about how it tracks and fights spam and hackers. On the question of whether that’s relevant to Musk’s defense, Judge McCormick gave little indication of her thinking in yesterday’s rulings. But we have more questions, like whether Twitter’s side will try to question Zatko on the timing of going public ahead of the big October showdown in Delaware. (Twitter has accused Zatko of “opportunistic timing.” Mudge has said he had no contact with Musk).

And, might Musk file a new, federalsuitagainst Twitter, alleging securities fraud and trying to get out of the deal that way? “It’s a bit of a long shot,” Eric Talley, a professor of corporate law at Columbia Law School, told DealBook. “But it’s not a crazy thing, if you were kind of backed up against the wall and you don’t like your chances on the contract.”

Companies will have to cough up much more information about executive compensation after the S.E.C. yesterday approved a new rule that’s been more than a decade in the making.

Citing the 2008 global financial crisis and “the stark misalignment of incentives that led executives to take excessive, catastrophic risks,” Commissioner Jaime Lizárraga hailed the ruling as a victory for shareholders. The Dodd-Frank Act of 2010, which was passed in response to the great financial meltdown and subsequent bank bailouts, directed the S.E.C. to make pay transparent. A 2015 proposal tried to do just that, but was never adopted. He hopes the new rule on executive pay will help “reduce the likelihood of future taxpayer bailouts.”

Executive pay must now be linked to specific performance goals. Companies will have to disclose and explain how their executives’ compensation relates to total shareholder return and other benchmarks. They will also have to show how their company’s pay data stacks up against peers.

Companies have flexibility in reporting this pay information — and that may be problematic, said Michael Dambra, a professor at the University at Buffalo School of Management. Any performance measure can be finessed, he said, and businesses could choose comparisons that put them in the most favorable light, defeating the S.E.C.’s larger transparency objectives. Dambra’s own work on the effect of pay disclosures has shown that more reporting isn’t always illuminating.

Don’t expect much to change. A study by Dambra and his colleagues published last month found that a 2015 pay ratio rule adopted by the S.E.C., which required companies to report C.E.O. pay compared with the median compensation of their employees, did not lead to much, if any, pay reform. But he holds out hope for this latest rule. Because it requires firms to more explicitly articulate pay justifications, also in terms of shareholder returns, it could be more effective, Dambra said.

“It’s almost like every day you wake up and you’re punched in the stomach.”

— Mark Zuckerberg on “The Joe Rogan Experience,” about the pain of waking up every morning as Meta’s co-founder and C.E.O. His remedy? An hour of mixed martial arts before work.

60: As in, the markets have assigned 60 percent odds that the Federal Reserve will raise U.S. interest rates by 75 basis points at next month’s board of governors meeting. For those keeping score: a 75-basis-point increase is considered hawkish, and could spook stock markets. Meanwhile, a 50-basis-points raise, which would be preferred by a majority of investors, is now looking less likely.

80: That’s the percentage increase in energy prices that most British households will pay this fall, after Britain’s energy regulator raised the cap on what typical customers will pay for electricity and gas in a year. That “cap” will be increased to 3,549 pounds ($4,200) in October. Industry forecasts predict that the cap will rise yet again to £6,600 a year by the spring.

Best of the rest

We’d like your feedback! Please email thoughts and suggestions to dealbook@nytimes.com.

Some on the Left Turn Against the Label ‘Progressive’

The Crypto World Can’t Wait for ‘the Merge’

‘Buy Now, Pay Later’ Is the Victim of its Own Success

How a Drug Company Made $114 Billion by Gaming the U.S. Patent System