In Paldiski, Estonia, abandoned Soviet-era bunkers, splattered with graffiti and overgrown with weeds, are a reminder of the centuries-long domination that Russia once exerted over the Baltic region.

Now this port city in the northwestern corner of the country is hastily being turned into a bulwark against Russian efforts to politically pressure Europe. Ever since Moscow threatened to withhold natural gas as retribution for countries opposed to its invasion of Ukraine, workers in Paldiski have been constructing an offshore terminal for non-Russian gas at a round-the-clock pace.

The project is one piece of Europe’s strategy to quickly wean itself off the Russian energy that is heating homes and powering factories across the continent.

The Estonian terminal will serve as a floating dock for a gargantuan processing tanker that will receive deliveries of liquefied natural gas and convert it back into a vapor that can be piped through the existing network that serves the Baltics and Finland. With a scheduled finish date in November, Paldiski is on route to be the first new L.N.G. terminal completed in Europe since the war started.

Shipping natural gas in a liquefied form has become Europe’s eureka solution to what the European Commission has labeled “energy blackmail” by President Vladimir V. Putin of Russia. Since the fighting began in late February, 18 new facilities or expansions of existing ones have been proposed in 11 European countries, including Germany, the Netherlands, Italy and Greece, according to Rystad Energy.

European leaders have been traveling to the Middle East and Africa — including to some countries previously held at arm’s length because of human rights abuses — to compete for the world’s limited L.N.G. supply or plead for the rapid development of additional sources. Until the war, China, South Korea and Japan were the biggest customers.

“L.N.G. is really the only supply element that is able to step up for the coming years” during the transition to more climate-friendly renewable energy sources, said James Huckstepp, head of European gas analysis at S&P Global Commodity Insights.

Although the United States and Qatar, the biggest producers of L.N.G., are ramping up operations, it will take at least a couple of years to significantly increase capacity. So businesses and households are bracing for high prices and painful shortages during the cold winter months. Governments have drawn up emergency plans to cut consumption and ration energy amid dark warnings of social unrest.

Marti Haal, the founder and chairman of the Estonia energy group Alexela, shakes his head at the feverish race to construct liquefied natural gas terminals. He and his brother, Heiti, proposed building one more than a dozen years ago, arguing that it was dangerous for any country to be solely dependent on Russia for natural gas.

“If you would talk with anyone in Estonia in 2009 and 2010, they would call me and my brother idiots for pursuing that,” Mr. Haal said. He was driving his limited-edition Bullitt Mustang, No. 694, in Steve McQueen green, to the site of the terminal in Paldiski that his company is now building. He slowed down to point out the border of a restricted zone that existed before the Soviet Army left in 1994. When Moscow was in control, Paldiski was emptied of its population, turned into a nuclear training center and surrounded by barbed wire. 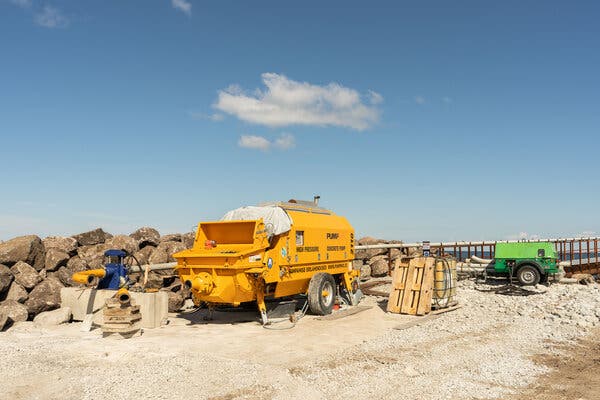 The facility was met with shrugs when it was first proposed over a decade ago. Now construction is on a frenzied pace.Credit…Marta Giaccone for The New York Times

As he drove on, Mr. Haal recalled the debate over building an L.N.G. receiving station: “Everybody we talked to said, ‘Why do we need diversification?’” After all, gas had been reliably arriving through Russian pipelines since the 1950s.

Today the brothers are looking more like visionaries. “If at the time, they would have listened to us, we wouldn’t have to run like crazy now to solve the problem,” Mr. Haal said.

Mr. Haal, who spent that morning competing in a regatta, always had an entrepreneurial streak — even under Communism. In 1989, as the Soviet Union was dissolving, he and his brother started building and selling car trailers. Mr. Haal said he would drag one on board the ferry to Finland — the fare to bring it by car was too expensive — and deliver it to a buyer at the Helsinki port. He collected the cash and then returned to pay everyone’s salary.

When they started selling gas, they named the company Alexela — a palindrome — so that they would have to erect only one sign that could be read by drivers in both directions.

Their L.N.G. venture at one point looked like a failure. As it turns out, the millions of dollars and years of frustration meant that when Estonia and Finland agreed in April to share the cost of renting an L.N.G. processing vessel and build floating terminals, the preliminary research and development was already done.

In the months leading up to Russia’s invasion, Mr. Haal said, soaring gas prices had already begun to change the economics of investing in an L.N.G. terminal. Now, his major concern is ensuring that the Estonian government completes the pipeline connection to the national gas network on time.

Over the years, the question of building more L.N.G. facilities — in addition to the two dozen or so already in Europe — has been repeatedly debated in ports and capitals. Opponents argued that shipping the chilled, liquefied natural gas was much more expensive than the flow from Russia. The required new infrastructure of port terminals and pipes aroused local opposition. And there was resistance to investing so much money in a fossil fuel that climate agreements had eventually targeted for extinction.

One of the countries saying no was Europe’s largest economy, Germany, which was getting 55 percent of its gas from Russia.

“The general overview was that Europe had more L.N.G. capacity than it needs,” said Nina Howell, a partner at the law firm King and Spalding. After the invasion, projects that had not been considered commercially viable, “and probably wouldn’t have made it, then suddenly got government support.”

Estonia, which shares a 183-mile border with Russia, is actually the European country least dependent on its gas. Roughly three-quarters of Estonia’s energy supply comes from domestically produced oil shale, giving it more independence but putting it behind on climate goals.

Still, like the other former Soviet republics Lithuania and Latvia, as well as former Communist bloc countries like Poland, Estonia was always more wary of Russia’s power plays.

Two days before the war started, the Estonian prime minister chided “countries which don’t border Russia” for not thinking through the risks of depending on Russian energy.

By contrast, Poland moved to quit itself of Russian natural gas and began work in 2013 on a pipeline that will deliver supplies from Norway. It is scheduled to be completed in October. Lithuania — which at one point had received 100 percent of its supply through a single pipeline from the Russian monopoly Gazprom — went ahead and completed its own small L.N.G. terminal in 2014, the year that Russia annexed Crimea.

Liquefied natural gas terminals are not the only energy source that European countries once disdained and are now compelled to explore. In a hotly disputed decision, the European Parliament last month reclassified some gas and nuclear power as “green.” The Netherlands is re-examining fracking. And Germany is refiring coal plants and even rethinking its determined rejection of nuclear energy.

In Paldiski, enormous wind turbines are along the coast of the Pakri peninsula. On this day, gusts were strong enough not only to spin the blades but also to halt work on the floating terminal. A giant tracked excavator was parked on the sand. At the end of a long skeletal pier, the tops of 200-foot-long steel pipes that had been slammed into the seabed poked up through the water like a skyline of rust-colored chimney stacks.

Paldiski Bay, which is ice-free year-round and has direct access to the Baltic Sea, has always been an important commercial and strategic gateway. Generations before the Soviets parked their nuclear submarines there; the Russian czar Peter the Great built a military fortress and port there in the 18th century.

Now, the bay is again playing a similar role — only this time not for Russia.

Remains of a Soviet-era bunker. The region that will boost the energy security of the Baltics was used as a nuclear training site when Moscow was in charge.Credit…Marta Giaccone for The New York Times

‘Today, You Can Walk Around Like You Own the Place.’

A Greek Scandal Reverberates as Eavesdropping Expands in Europe