ASPEN, Colo. — Summers in Aspen are usually a breezy idyll of sunny hikes and ice-cream socials, a season when rich tourists fly in to attend jazz festivals and soak up mountain views from their $1,000-a-night hotel rooms.

But, lately, a tangled saga of wealth and the free press has become Aspen’s summer obsession. It erupted after a wealthy real-estate developer sued The Aspen Times, the town’s oldest newspaper, for libel last spring, saying that the paper defamed him and falsely referred to him as a Russian oligarch in the charged days after Russia invaded Ukraine.

A lawsuit by a powerful out-of-town developer might have been big news for the 140-year-old Aspen Times. The paper is a beloved institution that has chronicled scandals and squabbles from Aspen’s silver-mining days through its transformation into a gilded skiing and cultural mecca in the Rockies.

But former staff members say the paper’s corporate owners, a West Virginia-based newspaper chain, did not allow The Aspen Times to write about the libel lawsuit and blocked other pieces about the developer, Vladislav Doronin, from running as the two sides negotiated a settlement. The lawsuit was settled in May.

The Aspen Times’s publisher and corporate leaders say they have not censored any coverage. But the episode demoralized the newsroom and brought criticism around Aspen that the paper’s owners had been cowed by a developer. One editor quit. Another editor was fired after running opinion columns about what happened. 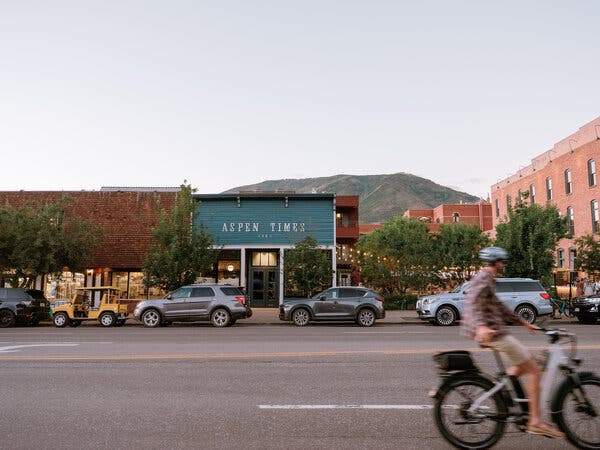 A wealthy real-estate developer sued The Aspen Times for libel last spring, saying that the paper defamed him and falsely referred to him as a Russian oligarch after Russia invaded Ukraine.Credit…Matthew Defeo for The New York Times

In Aspen, the dispute has left residents and officials asking whether local journalism could still tell the truth fearlessly and independently in a town with such outsize gaps in wealth, where an average home costs nearly $3 million, small shops are being supplanted by the likes of Gucci and Dior and local workers are being pushed out.

“If we lose that, it feels like there’s nothing left for us,” said Roger Marolt, a longtime columnist who left The Aspen Times.

On Wednesday, The Aspen Times provided an answer to that criticism by publishing a long-delayed story that delved into the finances of the developer who had sued the paper. The article, based on public records and court documents, raised questions about the developer’s statements that he had stopped doing business in Russia in 2014.

The whole story began in early March, when a veteran reporter for The Aspen Times doing routine checks of county real-estate filings stumbled across a blockbuster: Mr. Doronin had quietly snapped up a hotly contested acre of land at the base of the Aspen ski mountain through his Miami-based firm, the OKO Group.

Even in a town with eye-watering property values, people were stunned by the price. Mr. Doronin paid $76 million, more than seven times the $10 million that the property had sold for less than a year earlier when a group of local developers bought it from the Aspen Skiing Company, according to property records.

The property is part of an ambitious effort to build a new luxury hotel and lodge, ski lift and ski museum that voters narrowly approved after a divisive referendum.

Jeff Gorsuch, a second cousin of the Supreme Court justice Neil Gorsuch, fronted a group of local developers that bought land and then sold it to the Russian developer. Credit…Matthew Defeo for The New York Times

The team of local developers had a public face in Jeff Gorsuch, a second cousin of the Supreme Court justice Neil Gorsuch. The team had spent years working up plans and studies and went door to door to earn voters’ support. Aspen residents and leaders said they were shocked to read in the local paper that the developers had sold.

In an interview, Mr. Gorsuch said the sale had been a business decision. “That’s the way the world works,” he said, adding that he retained high hopes for the property’s future: “I still think it’s going to be great.”

Almost immediately, residents around Aspen started asking about the deal and the new owner, Mr. Doronin.

According to court documents, Mr. Doronin was born in what was then Leningrad, now St. Petersburg, and renounced his Soviet citizenship after leaving the Soviet Union in 1985. He is a Swedish citizen who lives in Switzerland and has never held Russian citizenship, his lawyers say.

In 1993, Mr. Doronin founded a real-estate development company in Russia that built dozens of residential, retail and office buildings in Moscow, according to court records. In the libel complaint against The Aspen Times, Mr. Doronin’s lawyers said he had earned his money legitimately, free of bribery or corruption, and had no affiliation with President Vladimir V. Putin.

After the Russian invasion, Mr. Doronin issued a statement on LinkedIn to denounce “the aggression of Russia on Ukraine and fervently wish for peace.”

In an email, Mr. Doronin said that Aspen’s “special energy” had drawn him to look for investment and development opportunities there after years of visits to ski and attend summer cultural events. He said he was planning to build a hotel on the property and would travel to Aspen to meet with local officials and others.

He said he sued the paper in April “to address factual inaccuracies that were having a negative impact.”

The site of the controversial development is at the foot of the mountain.Credit…Matthew Defeo for The New York Times

In the libel complaint, Mr. Doronin accused the paper of stoking anti-Russian sentiment and making “misplaced Russophobic attacks” against him. He objected to articles referring to him as an “oligarch” and a letter to the editor that suggested he was laundering money through Aspen real estate — all untrue statements, his lawyers said.

Rick Carroll, the Aspen Times reporter who discovered Mr. Doronin’s land purchase, was also among the first to notice the libel lawsuit in public records. He spotted it even before the paper’s owners had been served, according to former staff members.

It was another big scoop, only now, The Aspen Times was at the uncomfortable center.

The Aspen Times is one of several resort-town newspapers that were bought up last December by Ogden Newspapers, a family-run company that owns more than 50 newspapers across the country. The chief executive, Bob Nutting, also owns the Pittsburgh Pirates.

Officials with Ogden Newspapers decided not to cover the lawsuit while the two sides sought a settlement. Two former editors say that Ogden also declined to run a news article and two opinion columns related to Mr. Doronin.

Eventually, The Aspen Daily News broke the news that its competitor had been sued. There was not a public peep from The Aspen Times until after the lawsuit was settled in May.

Conflicts over The Aspen Times’s coverage of the real-estate deal led to a newsroom exodus and rattled public confidence in the paper.Credit…Matthew Defeo for The New York Times

Under the settlement agreement, the paper made what an Ogden official described as “small edits” to two articles. It removed a letter to the editor and agreed to make a good-faith effort to seek comment from Mr. Doronin on future articles.

The paper’s Aspen-based publisher, Allison Pattillo, disputed criticism that the paper had been muzzled.

While The Aspen Times did not cover the lawsuit against itself, she said, there were no restrictions against further articles about Mr. Doronin or the land deal. She said the libel lawsuit had “zero effect on our coverage.”

“The notion that we were bullied by Doronin or that Doronin has any input in our newsroom is ludicrous,” Ms. Pattillo said in an email. “We have not and never will act to suppress the truth.”

Some former staff members say the paper’s managers quashed mentions of Mr. Doronin after he sued. When David Krause, a former editor, emailed management in April to discuss an article digging into Mr. Doronin’s business connections, an Ogden Newspapers executive replied, “No reporting on these matters at this time.”

“People have lost faith,” said Marie Kelly, 72, who walks every day to pick up a copy of The Aspen Times.Credit…Matthew Defeo for The New York Times

The aftermath led to a newsroom exodus and rattled public confidence in the newspaper, according to interviews with more than a dozen local journalists, officials and Aspen residents. The Aspen Institute, a nonprofit powerhouse that puts on the annual summer Ideas Festival, said it had “taken a pause” in its advertising in The Aspen Times for now.

“People have lost faith,” said Marie Kelly, 72, who walks every day from her one-room rental in an old ski chalet to pick up a copy. “They didn’t emulate the Aspen attitude, which is: We’re going to put it out there, good or bad.”

Mr. Krause left his job as the paper’s editor in May, citing a health scare and conflicts with the paper’s ownership.

His replacement, Andrew Travers, a respected local journalist, made restoring public trust his first priority. To that end, he decided to run two columns that had gone unpublished after the lawsuit was filed as well as a string of internal emails that showed the tumult inside the paper.

Mr. Travers said he discussed his plans with his publisher, Ms. Pattillo, before he ran the pieces in June. But hours after they were published, he said, he was called into a meeting and fired by an Ogden official. He said he felt blindsided.

“I’d worked through the system to do the right thing for the paper and the public interest,” he said. “We were going to reckon with this. It was going to be a black eye, but we were going to move forward. Clearly, I was wrong.”

Officials in Pitkin County, upset at the turmoil, recently voted to designate Aspen’s younger, locally owned newspaper, The Aspen Daily News, as the official “paper of record” that publishes all of the county’s legal notices. A handful of other advertisers have pulled back.

In June, 18 current and former elected officials signed an open letter saying they had lost confidence in Ogden Newspapers’ leadership of the paper and raised the idea of boycotting the paper or refusing to speak with Aspen Times reporters. The letter brought its own blowback, with Ms. Pattillo, the publisher, calling it “actual censorship.”

Today, the paper is down to just one reporter. Mr. Travers, the fired editor, is looking for another job that could support his young family.

This week, The Aspen Times published a column by its latest editor, who said he hoped to rebuild the staff and “rise from the ashes.” Two days later, it posted its article investigating Mr. Doronin’s finances. The byline was Rick Carroll, the reporter who had broken the story in the first place.

Rhythm of War: A Thunderous Blast, and Then a Coffee Break

Sue Bird Became the Legend She Needed: ‘There Was No Real Path’